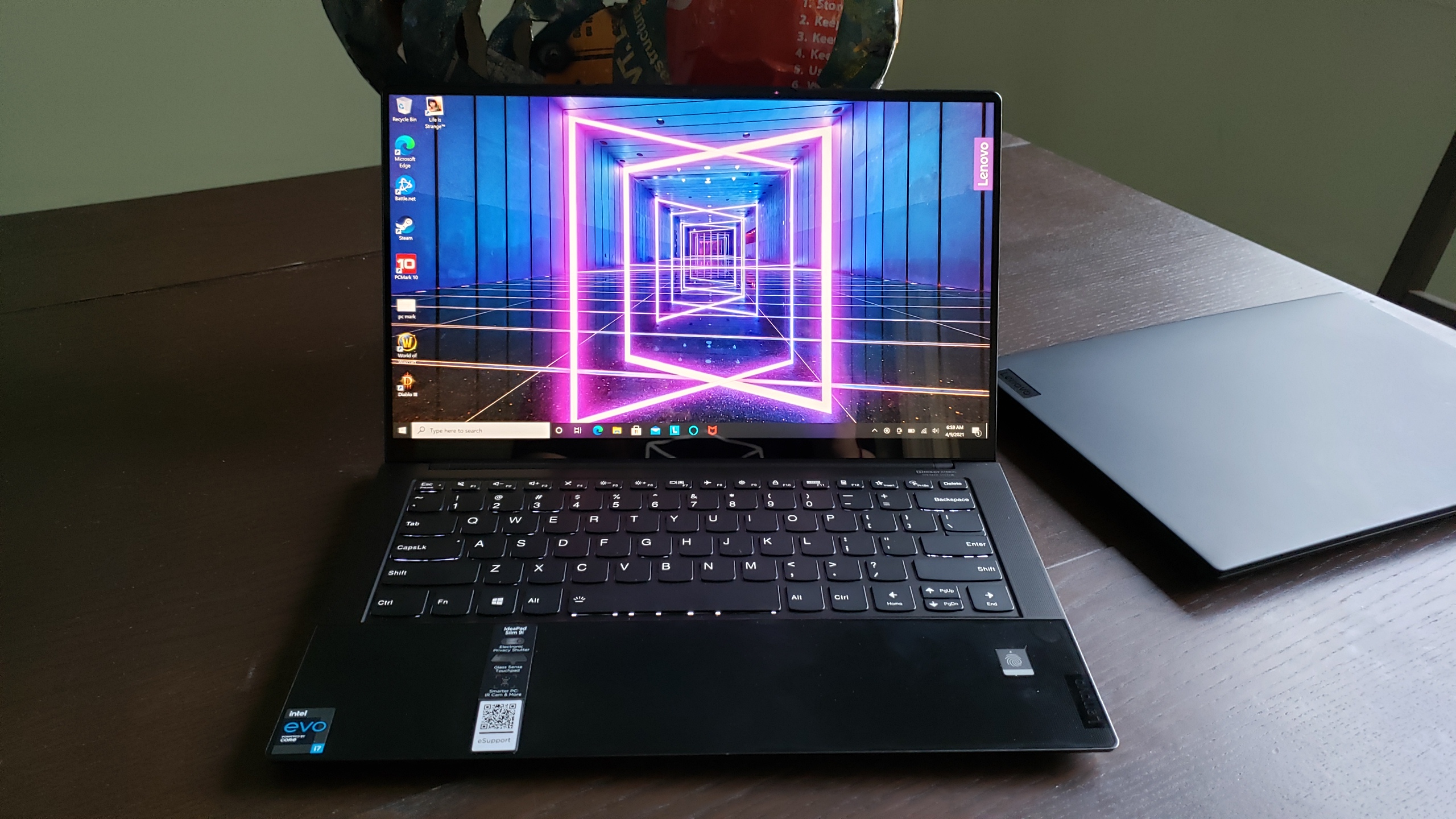 3 ports becomes 2 ports if charging up

Lenovo has been focusing on providing a luxury experience for business users as well as a slew of options at 14″ with their IdeaPad and Yoga models as of late and the Slim 9i is no exception. This one had a pretty similar look and feel to the leather-wrapped Yoga 9 2-in-1 we took a look at a little while ago, just with a more traditional laptop form factor. This particular model is available for $1,599.99 (on sale now for $1,304.99) at Lenovo for this particular model I’m reviewing, but you can also build your own starting at $1,250. Before we begin, the specs: At 14″, the Slim 9i looks and feels from the outside like the Yoga 9 – it’s got a high grade aluminum chassis and leather bonded to the top to provide a luxury and stylish feel when you pick it up and open it to Windows 10 Pro. It’s a little thinner and lighter than it’s Yoga cousin, starting at 2.65lbs and 0.55″ inches thick that make it feel like you’re carrying next to nothing. There is a tradeoff for that thin form factor though – Unlike the Yoga, the Slim 9i doesn’t have a garaged stylus, even though it might not be a need since we’re not going to be flipping this one over into tablet mode. To support the svelte size we also no longer have full size USB ports – in addition to the headphone/mic jack we have 3 USB4 / Thunderbolt 4 ports, all of which can be used for DisplayPort and power delivery. Another luxury touch is the edge-to-edge glass deck and touchpad under they keyboard, with a touchpad and fingerprint scanner so well camouflaged that you might miss them at first glance. Without the sticker on the deck to indicate to me where the fingerprint scanner was it took me a bit to find it and get used to it, but once I did it was second nature. The touchpad on the other hand took some serious getting used to – it blends in with the deck so well that I had to train myself on where the corners were so I could execute a right click. The keyboard is an island-style short travel keyboard, so it takes a lot less effort to get words on the screen as opposed to some of the more clicky full-size keyboards we have in our arsenal here. Typing is about as close to silent as it can get, and after a short learning curve you will be typing at speed in no time. While they’re moving some of their ThinkPads to a 16:10 screen ratio, the Slim 9i sticks with 16:9 with a nice and bright UHD touchscreen at 3840×2160. At 500 nits watching high-resolution video was great, and though there’s no dedicated GPU inside this thing for a smooth and dominant level of frames per second, the games I could play on it looked great. The screen of has super slim and nearly non-existing bezels, and is so thin that the 720p IR camera shutter switch is actually on the right side of the laptop.

And as a bonus, Lenovo provided a sleeve for the laptop in the box. The new generation of light and portable from Lenovo feature 11th-gen Intel chips using their Evo platform, which was built to provide longer battery life and responsiveness for mobility. To that end it has their integrated Iris Xe graphics, so we kept up with our gaming tests to see what we could actually do with it. This is by no means a gaming machine, but that doesn’t mean that game benches aren’t good performance indicators. Passmark ranks Iris Xe at 2,880 – for reference a GTX 660 (what I have been successfully using for years now) scores a 3,955.

Before that though we ran our standard PC Mark 10, on which the Slim 9i scored a 4,765 – this breaks down on 9,359 for essentials, 6,701 for productivity, and 4,682 for digital content creation, which was this laptop’s bottleneck. This means that editing photos, video and rendering is not something this machine is going to be a powerhouse for. But that’s ok, since it’s not supposed to be. This is almost in line with the Yoga 9 leather, which makes sense since the Slim 9i has a slower processor. For fun we ran this through the Shadow of the Tomb Raider in-game bench to see if we could get it to be playable on this machine. And you know what? We could. Naturally no ray tracing and the graphical settings had to be tuned to the lowest possible, but 1280×720 resolution we were able to get a playable 34 fps. Is it going to look amazing? No. but it makes it an option for travelers or folks that don’t want to fire up their gaming rig to play it in full. It also handled Diablo III at high quality settings at 2560×1440. So there are gaming options for you, even though that’s not the focus.

In short, for the business user, this will more than match what you’re looking for in a portable business machine.

The Slim 9i advertises double digit hours of battery life, but we have to keep in mind that mine has a UHD screen, so we should lower our expectations a bit with the spec/battery tradeoff. With the screen brightness at 60% and the battery profile set to “better performance” we saw what we can do.

Despite its heavy-handed naming conventions, we love the Final Fantasy XV universe here at TF, so we were happy to see Final Fantasy XV: Kingsglaive as a new addition to Netflix. After the couple of hours for that movie to conclude, it was unfortunately time to work. Spent the next couple of hours on office work and punching up documents in Microsoft 365, followed by taking a break with YouTube. Since this is a business machine I wanted to keep the tests more business focused, so some data visualizations were up next in Power BI. This machine had no issue running it, which is a fairly resource-intensive part of the Microsoft Suite, especially when you’re working with those files over OneDrive.

After calling it day after a number of Salesforce data refreshes for my Power BI Dashboards it was quitting time, so with 7 of solid use in the battery was still kicking and prepared for a day 2 of testing. The Slim 9 lasted for a good portion of day 2 before giving up and going to a blank screen, ending my test at just shy of 13 hours.

This is one of those not-so-common occasions where what I got lines up with what was advertised. Lenovo advertised 12 hours from MobileMark testing and up to 15 hours for the UHD model, with up to 23 hours if I was using an FHD screen. Combined with the ability to turn on rapid charging through Lenovo Vantage, we’re pretty confident in saying you’ll never really be short of battery.

There are a lot of 14″ laptops in Lenovo’s fleet at the moment, but if your interest is premium feel and a lux experience, this is going to be a good option for you, as well as its bendy Yoga cousin. The leather and aluminum chassis construction feels sturdy and high grade, and they definitely leveraged Intel’s Evo platform to provide great battery life and minimize downtime as much as possible. Normally around $1,600 and currently on sale for $1,305, and though slightly slower than the Yoga version, the IdeaPad Slim 9i is a good “prosumer” laptop choice.

April 16, 2021
Our Review Process
Latest Reviews
Where to?