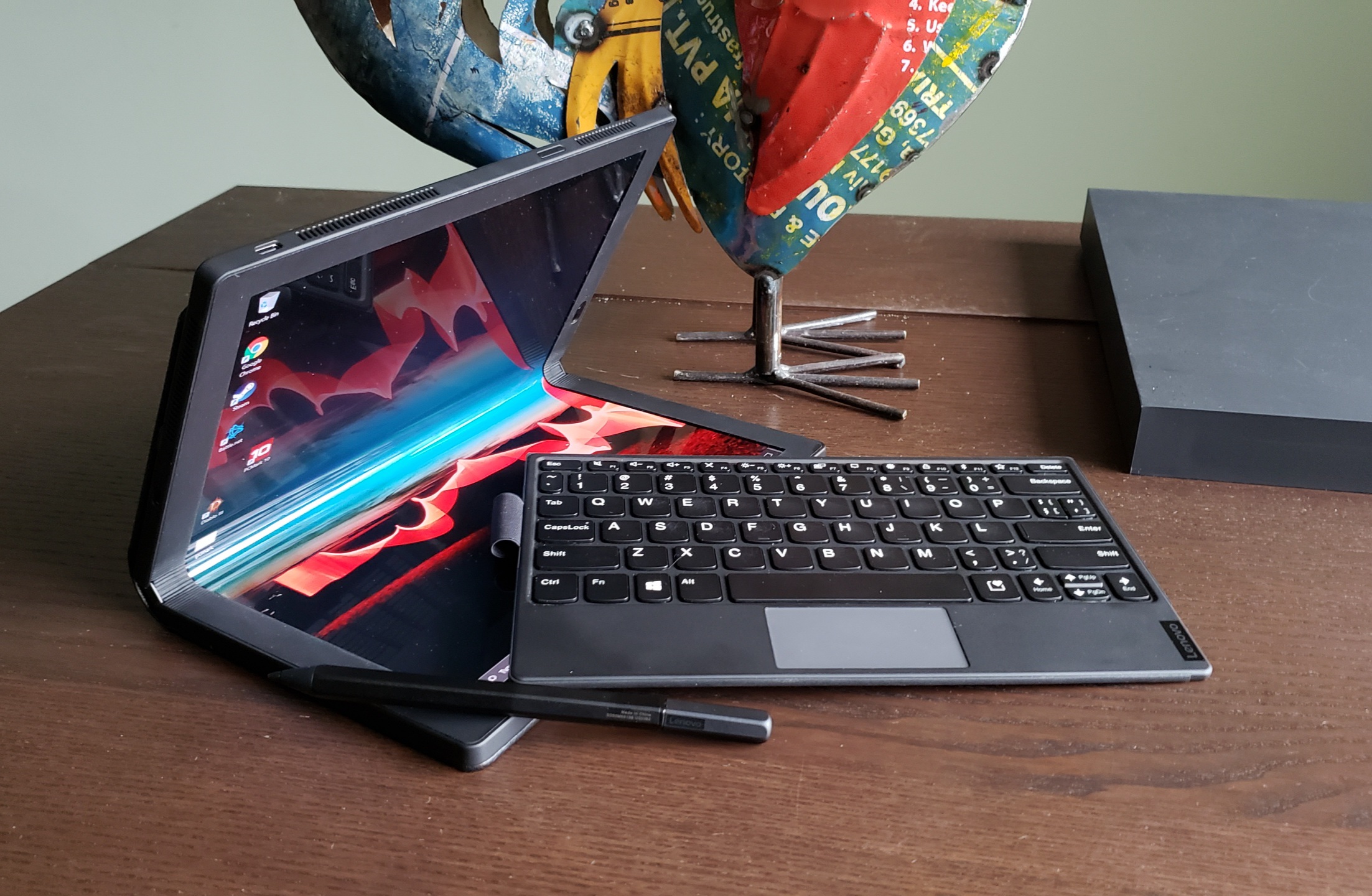 Could use more power for the price

Battery life suffers when keyboard is in use

Foldable screens are the new hotness. We’ve seen them at CES for the last couple of years with manufacturers teasing concepts that play with bendable screens in the mobile world. Lenovo took another avenue, bringing folding OLED tech into laptops with PC specs. So what we have is a new market entry with the ThinkPad X1 Fold – a foldable PC with the aim of bringing us the best of both worlds, starting at $2,499. I can’t really use my normal review template for this one – there’s just too much new stuff to show you that doesn’t fall into my standard “everyday” and “gaming” tests you’re used to seeing on here.

As such, this is gonna be long, so TL;DR – this is an innovative unit with tons of potential that has a few drawbacks.

Before we get going, here are the specs of my review model: Well, this is new. On the one hand, opened up we’re looking at a 13.3″ tablet (11.79″ x 9.29″) at 0.45″ thick. There’s leather covering carbon fiber plates on the back, which cover the hinge in the middle. At the top is a webcam, with the right side of the frame housing power and the volume rocker. At 2.2lbs it’s definitely heavier than a standard tablet, but this has PC guts inside and additional mechanisms for folding so there is going to be that little bit of extra heft. A piece of the leather backing is hinged and can fold out for a kickstand, which is good for watching video or having a video call. As it’s built for portability the only ports are 2 USB-C’s, either of which can also be used for charging. On the other hand, folded in half it feels like you’re carrying around a nice 1 inch thick leather bound book, part of which slides back to reveal a glass finish on the edge for aesthetics. At 6.23″ x 9.29″ it’s compact and easy to carry around or slip into whatever size bag you’re carrying around. You can see a comparison in the photos here between the Fold and an X1 Carbon 8th gen.

Of course between closed and open is bent. In fullscreen mode the picture continues through the curve in the middle which is kind of cool to look at, and Lenovo has integrated a switch in Windows that lets you split into two screens separated at the fold. This lets you turn it into a dual-screen device on the fly. You can bend it into a laptop-like L shape and use the on-screen Windows keyboard to work, or just have two sets of things going. In my case here I was watching Batman Begins on screen 1 while doing generic computery stuff on screen 2. But that doesn’t have to be your only option. While not included in the base package, mine came with a super-slim Bluetooth keyboard and stylus. What’s cool is that the keyboard is magnetic, and when you have the X1 Fold bent, it will adhere itself to the bottom half, turning it into a full fledged tiny laptop. The keyboard also has a holder for the stylus, and the Fold has been designed to still close into “book mode” neatly with the keyboard connected. That option is going to set you back about another $300 on its own though if you don’t get a version that includes it.

Overall the build is very sturdy, and I was glad to see that my fear of “oh damn I’m gonna break this” were proven to be unfounded. And unlike other standard tablets, the leather folio while it’s closed gives me a lot more confidence that the screen isn’t going to take damage in transit.

Inside, the Fold uses a Core i5-L16G7, released in mid-2020 with Intel’s hybrid technology, which offers Core performance at lower power consumption and a smaller footprint, making devices like the X1 Fold and other new form factors possible. Graphics run on Intel UHD, because naturally we’re not going to be looking at a dedicated GPU in this kind of form factor.

With WiFi 6, Bluetooth, and optional 5G capability on Qualcomm’s X55 chipset, this PC was meant for business users that want portability and ease during travel. These are the folks that live the wireless fabulous life for maximizing space and minimizing clutter. Upgraded models run Windows 10 Pro – and if you’ll allow me to trade out my nerd hero cap for my tech boss bowler for a moment, I want the extra business options and security features 10 Pro provides, including the option of a domain join. From a device management standpoint, 10 Pro is just easier to manage on a corporate Windows infrastructure over Android or iOS.

Plus, I can run Steam on it to at least get some light gaming in. There was a bit of a learning curve on how best to implement this for my day to day needs. First and foremost it was incredibly easy for me to pack this in my tech bag and take it with me wherever I was going, even with a second laptop. On its own without attachments it was good enough for some light things – email, social, and consuming video content. But for work stuff I really needed the keyboard attachment to go further.

I even typed some of this article up on the magnetic keyboard – in fact, this very paragraph – which works well enough until you start getting into the need for special characters. That hyphen in the first sentence was Fn+9. That “plus” symbol? Fn+Shift+0. The quotation marks? Shift + the dedicated key for single and double quotes. With the size of the keyboard being a tiny 9″ wide, there’s many keys that pull not just double, but quadruple duty whether the key is pressed on its own, with Shift, with the Fn key, or both simultaneously. It made it a little difficult to power through things like entering those complex passwords you hate your IT department for inflicting on you. There’s some consolation with the dedicated symbol key, which houses emojis as well as special characters you can select with the trackpad. That trackpad, while it does work well and respond to gestures (though this is a touch screen so not too much need for that really), is very small for the sake of portability. My hands are on the smaller side so it’s not too much of a deal for me, but anyone with larger hands will find it a bit frustrating.

In only those couple of paragraphs I’ve adjusted a little bit to the more svelte key layout, but I still have to actively pay attention to find both the location and combination needed for special characters. Otherwise though, it feels good responds well for a keyboard that is literally as slim as one pulled from a laptop, and features inductive charging. If you have a desk handy, you can use the keyboard/trackpad detached while using the full screen and kickstand, or even use another Bluetooth keyboard of your choosing. The X1 fold will also work with a USB-C docking station and support two full-sized screens for your desk setup.

The stylus is programmable and makes a nice mouse replacement, giving you the option of using it for application control as well as using it for shortcuts like copy/paste functionality, and is a nice touch for those who use tablets for note taking. I currently use my Samsung Galaxy Note 9 phone or Tab S6 Lite for taking notes during meetings, and I found that same functionality here with Whiteboard and OneNote. Also, it’s fun to just sketch while you’re bored.

So with a full battery charge, wifi, and 60% brightness we saw how long we could keep this going. I started with some web browsing and document writing in Microsoft 365, answering emails and doomscrolling through my social feeds.

While the Fold was open I switched into Windows 10 tablet mode, which made navigation a bit easier. Windows 10 is a PC OS, and on a tablet it’s sometimes tough to move around and tap Start or folder icons to get where you need to go. Tablet mode will force it to operate in fullscreen, so you won’t be able to split it if that’s how you like to work. Using the Kindle app or other e-readers you can actually use the X1 fold as a book – either with the book on one side with a second screen app running, or you can go fullscreen for that “holding a leather tome” feel. I went with Tinker, Tailor, Soldier, Spy and it was a decent experience. Reading this way will bleed some words from the left into the “fold” but I didn’t really mind.

Despite the specs and no GPU the X1 Fold, I play games, so I’m going to try to game. Intel’s UHD graphics can handle the older games from your Steam library backlog or run modern games that aren’t graphically intensive. I was able to play Hearthstone in tablet mode and with reduced settings got in a little Diablo III, but that’s not what this unit is for so I left it at that.

After all was said and done, I got about 6 and a half hours before the battery called it quits. This was less than the advertised 10 hours.

I loved the screen in all modes, and when you need some brightness the 300 nit 2K display definitely delivers. And what was surprising is that the fold in the middle didn’t hinder operation at all – dragging and writing didn’t bump or skip while moving across the middle. When the unit is bent though, at that point dragging across the middle gets a bit difficult, but that’s understandable.

I absolutely love the concept of the X1 Fold and have been coveting this thing since CES. Lenovo is moving in the right direction by introducing this to the business market, but as a first to market product will carry additional cost. I mentioned at the top that the Fold starts at $2,499 – this is for Windows 10 Home, a 256GB SSD, 8GB of soldered memory, with no pen or keyboard. The top-line model comes in at $3,099, which includes the pen and keyboard and bumps the SSD up to 1TB with Windows 10 Pro.

As it stands now at that price point, it’s a niche device for early adopters, but has a ton of potential. Lenovo has taken extreme care in tuning the functionality of this new form factor, adding their own integrations into the OS to really make it work. But spec-wise there’s less inside than the current natural competitor that is the Surface Pro 7 at a higher price, even though I can’t classify the two as the same thing.

BUT, as a first to market product, the clear attention paid to design detail by Lenovo says to me that their next hybrid will be a big improvement over an already good thing, and push other manufacturers to try and catch up, including maybe some tweaks in Windows by Microsoft to support hybrid units further. I’m a fan.

April 1, 2021
Our Review Process
Latest Reviews
Where to?