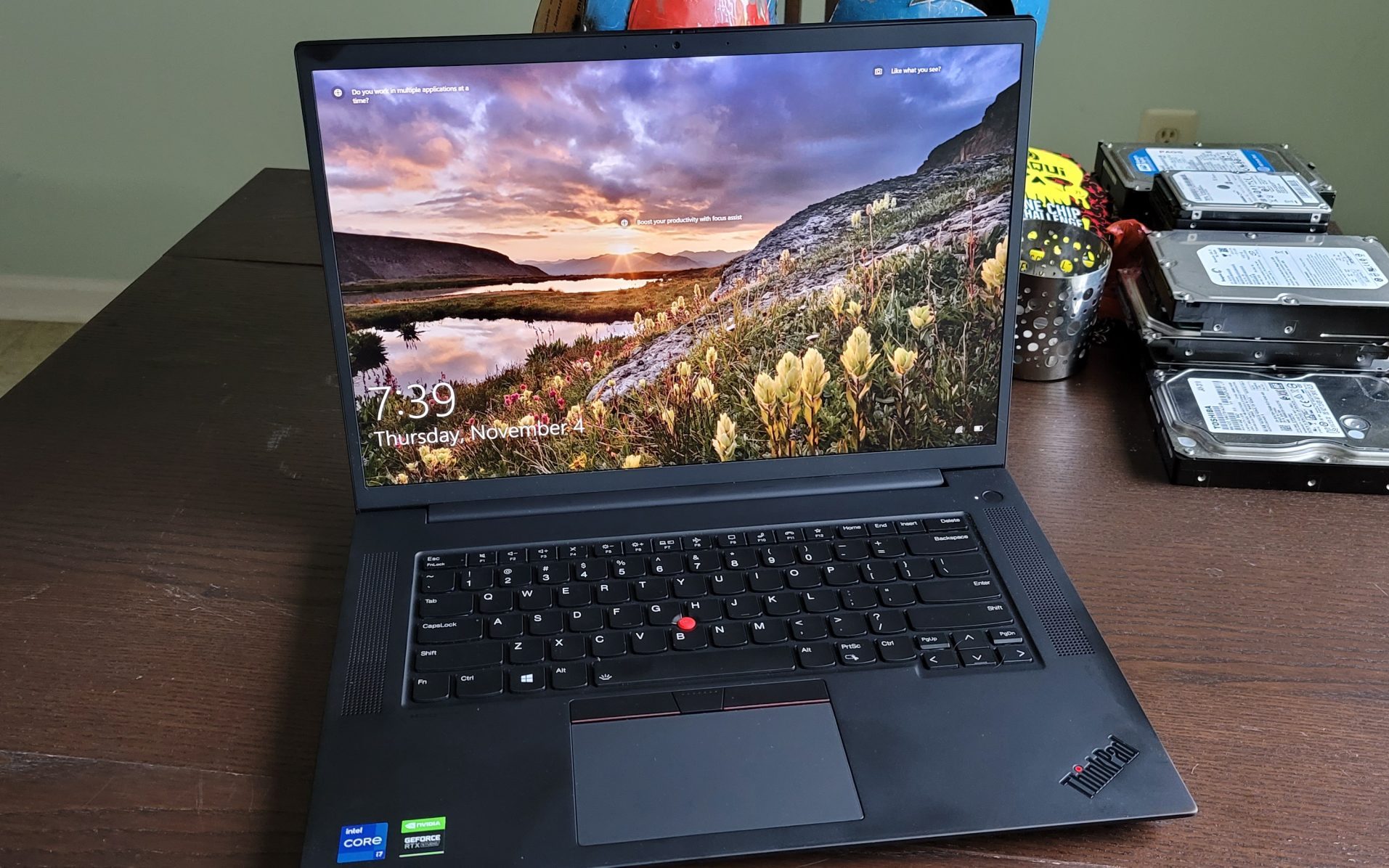 Specs are flexible for both work and play

Balancing work and play comes at a cost

Battery could be a bit better

Lenovo’s ThinkPad X1 Extreme Edition Gen 4 answers the question of “What would the work version of my Legion be like?” Drop the RGB LED’s and gaming styling and and we still have an 11th-gen i7 with NVIDIA RTX graphics. Add optional WWAN for a constant connection on the go, and this is a work machine with specs that should handle big workloads, and it starts at $1,770 at Lenovo right now. Before we put it through its paces, as always here are out specs:

So looking at the specs it’s easy to ask why this ThinkPad doesn’t come from the Legion line. Unlike the P-series the X1 Extreme has GeForce graphics as opposed to NVIDIA’s more engineering and design-oriented Quadro cards. But with vPro and a suite of security features on this system like Intel Remote Secure Erase and ThinkShield this still falls mostly in the work category.

The aesthetics of the X1 Extreme are consistent with the ThinkPad line of laptops with a sold black chassis, with the exception of the upgraded screens. Either of the WQUXGA (3840×2400) options replaces the solid black lid with a carbon fiber weave design like their smaller cousin, the X1 Carbon. Being targeted somewhere between a full out mobile workstation and a business traveler, the X1 Extreme weighs in at 3.99 lbs, far less than the 6 lbs you would have to carry around with one of Lenovo’s P-series workstations – and is thinner by quite a bit at 0.7″ thick. We have the same ThinkPad keyboard we love when we open it up, without the numpad on the right. Instead the space is used for up-firing speakers. The webcam on the top bezel is 1080p with a privacy shutter, and that can be upgraded to hybrid IR as well. We have a decent number of ports as well, and part of the “business” part of this machine is supporting USB-C docking. On the left there’s the power port, 2 USB-C Thunderbolt 4’s, an HDMI 2.1 and the mic/headphone jack. On the right are 2 USB-A 3.2 Gen 1 (1 always on), a 4-in-1 card reader, and a Kensington lock slot. My review model didn’t have the optional WWAN so it had no slot for the SIM.

This machine didn’t test drive like a worker. There was a completely different feel than working on one of Lenovo’s P-series mobile workstations. Another big differentiation is that the X1 Extreme edition doesn’t come with the ThinkReality A3 Smart glasses compatibility for AR, which is something that falls more into the domain of Quadro graphics. It felt more like a gaming laptop that I’d be able to use for work since we’re also running on Lenovo’s ThinkShield, a suite of security features for intrusion and tamper protection. And we really feel the difference with the move to a 16″ screen. It’s a balanced machine that works for the enterprise and lets you game with some high-powered graphics. And here’s how it performed in our battery of tests, including Procyon since a user might be slamming some serious Adobe suite work on this laptop:

PCMark 10: Our standard benchmark for office applications gave us a 6,328 (Essentials 9,721, Productivity 8,294, Digital Content Creation 8,529), far higher than the average gaming laptop score of 4,515 and beating out Lenovo’s Legion Slim 7, which we will have our full write up on soon.

3DMark Port Royal: This ray-tracing test came back with a 4,114, beating the average gaming laptop. Shadow of the Tomb Raider: We were able to get decent results in Lara’s adventures at FHD, where we got performance just about in line with gaming laptops, and very playable even with ray traced shadows turned up to ultra. There was a bit of a drop once we bumped the resolution up to 2560×1600, but still hit a minimum of just over 30 fps. Final Fantasy XV: While we didn’t hit the “very high” scores we got from some of our Legion gaming tests, we still got some very respectable numbers:

So Final Fantasy XV is still playable even when pumping the video out to a 4K display.

Procyon Photo Editing: This test gave us a 6.282 for editing and working with large photos in Adobe Photoshop and Lightroom.

Procyon Video Editing: The video editing benchmark that tests rendering and editing in Adobe Premiere Pro gave us a 4,988.

This was just about in line with Lenovo’s Thinkpad P15 Gen 2 workstation on an i7 and RTX Quadro graphics. In addition to these tests we just did some regular gaming without benchmarks and liked the way it felt. Xbox Game Pass always has some high-powered stuff for us to play that also doubles for testing. This time we went with Forza Horizon 4, where we were able to play on high with no issues.

The lower results we got here versus the Legion line though is expected – Legions have better tuning for gaming and “extreme performance” thermal mode through Vantage, which are features our built-in Vantage software didn’t support. The X1 Extreme edition is built with a 90Wh battery which boasts all-day battery life for 10 hours, which we know from our own experience goes down as the specs go up. This device maxes out with WQUXGA screen and an RTX 3080 with Max-Q. What we’re working with is a WQXGA screen and RTX 3060, so we expected to get close to that 10 hour number.

Starting with media consumption before work, we started with 2 hours of ridiculous yet somehow addictive period drama Downton Abbey, followed by making this my work machine for the day. A 4 hour client site visit with some YouTube videos during lunch later, and we still had juice in the tank. In the evening was some document work in Microsoft 365 apps, primarily setting up PowerPoint presentations. All in, we got roughly 7.5 hours, just shy of a whole day, and short of the advertised 10.

We expected a little more from this, and know that this is the high end because we don’t have the upgraded screen or the top-end RTX 3080, so expect this number to fall off a bit as the specs improve. It’s still quite impressive battery life, and we have no complaints.

Lenovo’s ThinkPad X1 Extreme edition is a notebook that serves a “one notebook for everything you do” machine for under $2k. Could you spec it out to nearly $4k? Sure, but just remember that you’re going to have a bit of a battery tradeoff. It has the enterprise and security features you need to use it for work, and even the “low end” RTX 3050 will handily support Adobe CC artists and perform well for engineers, though for heavy CAD work they’ll want one of the Quadro-equipped P-series workstations instead. It’s still going to be a pretty penny – that under $2k machine is for an i7, RTX 3050, and 8GB, so it will be more expensive than your garden variety notebook.

Still though I mean, it just… feels good to use. and I want one. For my purposes as an IT Pro and gaming enthusiast this is pretty perfect.

But if you’re not doing heavy CAD work, the X1 extreme edition is lighter, thinner, more portable, costs far less, and more than enough to cover both work and play than the P-series. We absolutely love its flexibility as a “generalist,” and definitely recommend it if you don’t want multiple “specialist” notebooks like a Legion and a ThinkPad P.

PAX East Returns to Boston for 2022

November 22, 2021
Our Review Process
Latest Reviews
Where to?