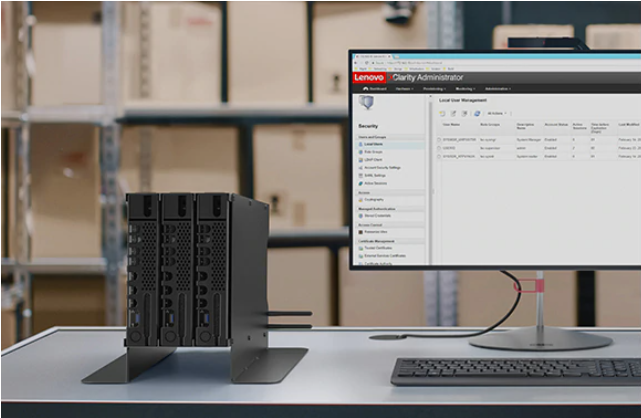 Purposely designed for edge, but can be used for other use cases

My day job is exuding technological excellence on a daily basis for my clients, so I was quite excited to get a chance to check out Lenovo’s ThinkSystem SE350 server. I’ve worked extensively with Dell and Hewlett Packard in the vast sea of server hardware I’ve worked with, whether they’ve been towers or racks. And I guess while I shouldn’t have been, I was intensely surprised to see the SE350’s form factor, which was… well… tiny. So let’s prepare to take a departure from our standard fare of gaming hardware and get down to business.

Before we dive in let me get into the specs of my test machine:

Keep in mind, this is a pretty top-line configuration, and what we’re reviewing will set on back for about $11k (actually right now a little over $5k right now using the code BLOWOUT30 here)

Above all else, the ThinkSystem SE350 is compact. Those of you that have worked with servers before know the trials and tribulations of 50lb+ towers or trying to fit heavy 2U servers on rack rails. What we’re looking at here is a 1U, half-width box that weighs in at under 25lbs. It can take up a piece of your rack, be placed flat or sideways or even on a wall mount for those of you that have tight spaces, or perhaps not a dedicated IT room at all. Take a look at this first photo to get a feel for that scale – that’s the ThinkSystem SE350 on the left next to Lenovo’s Legion 5i gaming laptop on the right. This is what i mean when I say compact.

Just because it’s small doesn’t mean Lenovo doesn’t pack a lot in. Network interface options for one are pretty varied, with some models (including ours) offering support for 10GbE SFP modules, wifi, and can even come 4G LTE ready. In addition are gigabit ports both for network and to connect to the SE350’s embedded XClarity controller (XCC) remote management. This is where you can set up and modify your network settings and RAID, as well as where your notifications will come from.

The biggest “specialty” in XCC on this server is due to it being designed as an edge server in mind, and to that end the embedded network controls allow for different network topologies for your ports. This means there’s advanced options to set what is controlled by the OS versus not, dedicated uplinks/downlinks, clustering, and even control of how the wifi operates. In addition to on boot, XCC controls can be accessed via web client once an OS is set up.

I mean truth be told i’ve never worked with a server that had 2 antennae coming off the back. It’s kind of cool.

Another feature due to the SE350’s “purposeful design” by Lenovo is tamper protection. Edge servers are often deployed outside of a secure datacenter or IT room, so tamper detection can encrypt all data on the system, enabling only authorized users to access it.

For us the default setting was the 2 M.2 SSD boot drives set up in a RAID-1 mirror for redundancy, ready for an OS install while the data drives remained ready to roll for data storage and sharing. And this is where the main strike for me comes up – Every server I deploy has at least a RAID-5 configuration for data redundancy. I get I can’t have it all, and RAID-5 requires a minimum of 3 disks, but oh my that would make this perfect.

For graphical capability, the configuration can be customized to include an NVIDIA Tesla T4 16GB PCIe Passive GPU to accelerate performance for another couple thousand added to the price tag.

We do a lot of Windows Server here professionally so our test run was a build on Windows Server 2019. A clean install straight from USB media was pretty straightforward, but we went through spinning up the ISO through Lenovo’s XClarity controls on boot. With the preset scripts and the Windows ISO on hand, we were actually up and running in about half an hour.

The processor in our review model is the top end of the Xeon-D 2100 series, giving us 16 cores. The SE350 does have some more budget friendly options starting at 4 cores and shaving a couple thousand off of the price, but we were going to have some fun with the power we had. The one place you will save a little bit of money for you Windows folks like us is on licensing. Maxing out the Xeon-D 2100 at 16 cores means that it juuuuust fits for 1 Windows Server Standard license, which also provides 2 Hyper-V instances. Bigger servers that have multiple Xeon octa or 12-core processors will require you to purchase additional per-core licensing past 16.

Once the OS is up and running (and having the network topology you need through XCC) we had no issues with any sort of standard Active Directory setup. We spun up Hyper-V, making a virtual domain controller and secondary server, turning our single SE350 into a three-server domain.

And fun fact – while this doesn’t come close to the size of many modern servers, it can still sound like a jet engine taking off on boot. But come on, we’re all used to that.

Let me start by talking about how swole I can get carrying around towers and racking server systems. My meathead athlete friends can keep their free weights – I keep up with what I call “server presses.” The ThinkSystem SE350 on the other hand can be carried like a notebook, fit into tight spaces, and can be deployed in groups to really get some power and redundancy. So I guess I’ll have to find something else to fit into my IT gym.

Like we mentioned up top, we were playing with an $11k box with top end specs – $13k+ if we also had the NVIDIA Tesla – which is enough to run an entire server infrastructure for a small to midsized business, at least on the Windows side. So while this is aimed to be an edge server, it still provides flexibility on use based on your configuration.  Deploying Hyper-V and using the 2 instances allowed under a single Windows Server license gives you a total of three, and three strong ones at that. 16 cores and 256GB of memory to play with really opens up some options. The entry level model is a 4 core Xeon-D with 8GB memory for about $3k (available right now at a steal for $1300), but you will get of this server every bit you put into it. With the exception of the lack of RAID-5 as a storage option, The ThinkSystem SE350 is small and flexible for most SMB’s to run whatever they need to.

January 20, 2021
Our Review Process
Latest Reviews
Where to?