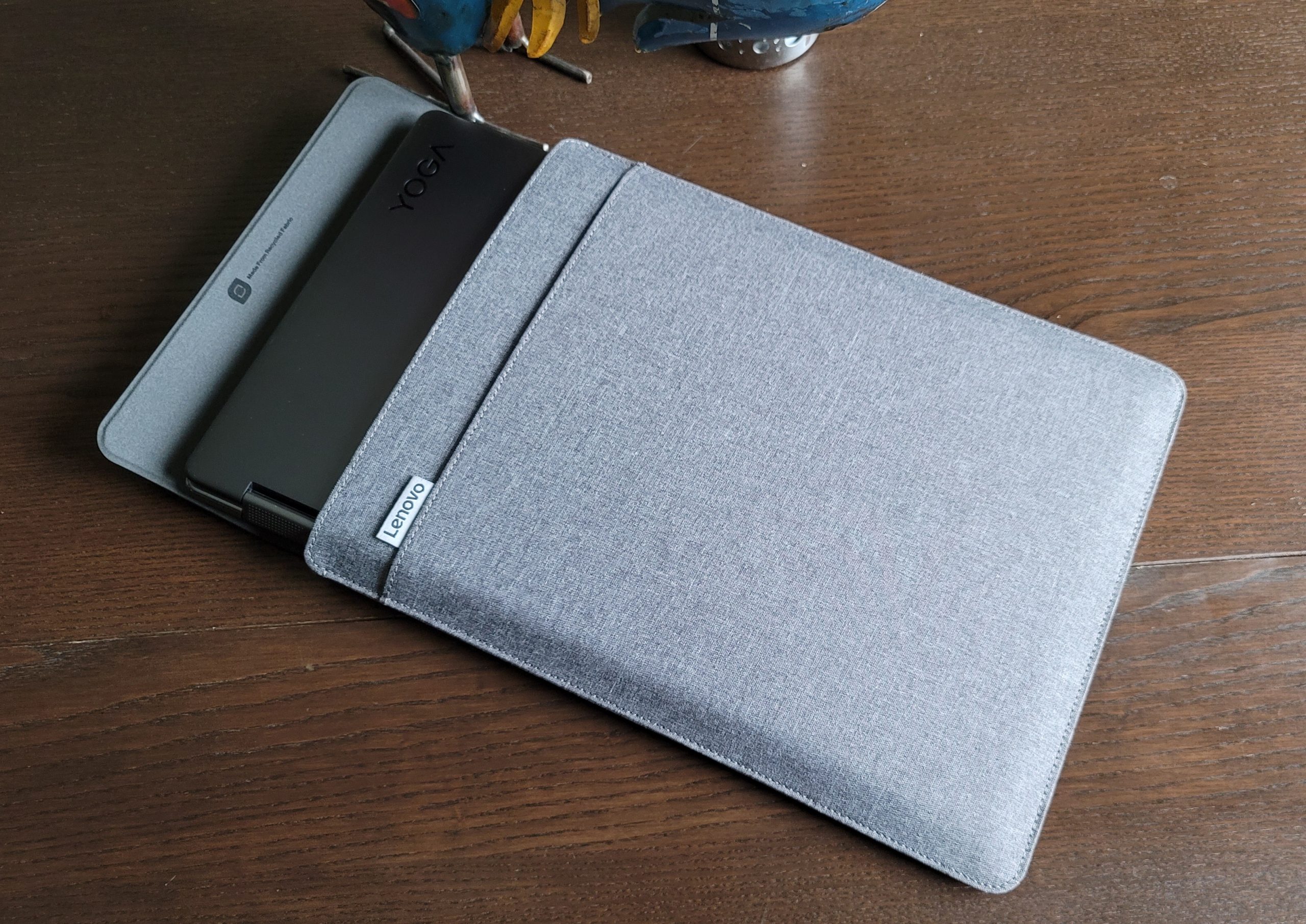 Wish the soundbar was just a bit louder

We’ve finally started getting in some of the gear that was announced at CES early this year. Our first piece is Lenovo’s new redesigned flagship convertible, the Yoga 9i Gen 7. This fresh model starts at $1,229 at Lenovo, but this one we have for review is a Best Buy exclusive model, going for $1,929.99 next month. Here are the massive specs that gets us: Specwise, we’re looking at a 12-core processor in this 2-in-1 with 16GB memory, so we were pretty excited to see how this performed.

In addition to the spec bump, the Yoga 9i has a sleek redesign from their previous generation. Most pronounced are the move to polished, rounded edges on both the deck and screen, as well as the shift to a 16:10 aspect ratio. It’s a whole different aesthetic that provides a glossy exterior, but at the same time offers some additional comfort when flipping the screen over to operate in tablet mode. The 14″ 2-in-1 measures at 12.52 x 9.06 x 0.6 inches and weighs in at 3.09lbs, just slightly heaver than the 3.02lbs of last year’s various X and C-series Yoga models. They keyboard’s been updated with an additional row of 1-click function keys on the right edge just below the delete key that add some convenience for changing on the fly settings. You can change the performance mode without having to open Vantage, add background blur to your video calls, change between light and dark mode, and change audio modes between movie, music, and game. Underneath that is the fingerprint scanner for biometric login. The keys themselves keep the “soft landing” switches with white LED backlight, so typing provides the same quick action you’re accustomed to.

Also in the deck is a glass-top buttonless touchpad that’s been upsized by 45% over the last generation, making it a easier to use and giving us a larger surface to drag a finger across before having to pick up and readjust. What we are really impressed with is the top half of the laptop, featuring a 60Hz 3840×2400 OLED touchscreen shining at 400 nits, with VESA DisplayHDR, which provides vibrant color and truer blacks for great contrast for both media and games. It’s a great screen and with the darker blacks 400 nits is enough to feel even brighter.

Above the screen is an IR and RGB hybrid webcam with a physical privacy shutter. The camera’s great for video calls (and blurring the background with the quick key) and the mic picks up sound clearly.

Since the keyboard is edge to edge, the sound is provided through a Bowers & Watkins rotating soundbar with Dolby Atmos, containing two tweeters with woofers located in the corners of the deck. The “music” audio preset puts some more emphasis on the mids while “gaming” and “movie” push the sound profile up to the higher. The soundbar does provide decent sound, I just wish it was able to go louder. In our testing tent mode was the best mode for audio, mainly because that puts the soundbar on top – useful for the mode we would use most for media consumption. As all Yogas do, of course the 9i can be used in laptop, tent, or swiveled all the way over for tablet mode. For that it’s bundled with the Precision Pen 2 for sketching and notetaking. We get some decent sketching and handwriting without stray marks, so it’ll work well for note takers. And to address the non-garaged pen, bundled in with the laptop are a protective sleeve with pen holder. This will make it easy to carry around on its own or to put into a bag to carry. Tablet mode is more comfortable in the users’ hands over previous generations thanks to the new rounded edges – you can hold the system without feeling the corners so sharply. Otherwise the touchscreen is accurate and we didn’t experience any miscues with touch or pen input.

The Yoga 9i isn’t a gamer with its Iris Xe integrated graphics, so naturally we’re not expecting a lot of 3d mastery. But we still got some info from our battery of tests.

PCMark 10: Our office benchmark gave us a 4,960 (Essentials 9,985, Productivity 6,176, Digital Content Creation 5,369), giving us a score beating the standard office PC but short of gaming PC. The bottleneck here is the lack of a discrete GPU, but this shows it’s got more than enough power for personal and office work.

3DMark Time Spy: Time Spy gave us a 1,436, which is again better than the average office PC, and an expected score for a unit without a dedicated graphics card.

Without a discrete GPU and ray-tracing ability, we didn’t run Port Royal or Procyon. But we did still try to run it through our gaming benches, and found that light gaming on this unit is more than possible” Shadow of the Tomb Raider: So we’re not talking about killer FPS or turning graphical settings allll the way up, but we were still able to cleanly assist Lara with her adventures without choppiness.

We’re good with anything running 30fps or more, and even on this personal/office laptop, you can still play on the go. Final Fantasy XV: This one was another challenge with any settings turned up, but our results still gave us a playable option.

So yeah, tuning the resolution down to 1280×720 allows us to play with a standard gaming experience, and that’s without turning the settings down to low. While this isn’t a gaming powerhouse, it’s not designed to be, and still offers a gaming experience on the go. Like with all consumer Lenovo models it comes with a 3 month XBOX Game Pass subscription, so we took a look to see what the integrated Iris Xe could do. I pulled down Final Fantasy X/X-2 HD which ran very clean at FHD – it even ran in 4K with just a little bit of chop. The slightly newer Final Fantasy XIII was able to run, but we were only able to get it going in windowed and not full screen. Between this and being able to run Shadow of the Tomb Raider at 30fps, we’re pretty confident the 9i will also keep you entertained on your travels or between meetings.

We have the hi-res OLED as opposed to the FHD IPS screen so naturally we expected a battery hit. Lenovo advertises 10 hours for this mode, and we almost got there. On wifi and 60% brightness we began with full charge on the 75 watt-hour battery. Starting with media consumption as we generally do with our battery tests, we ran a couple episodes of Peaky Blinders on Netflix. From that point on I used it as my work machine, running Microsoft 365 to run documents and to type up this post on the couch while watching TV. On top of that was some web browsing and responding to some of the PAX East press emails that are starting to come through, as well as 2 hours of video calls on Zoom and Facebook Messenger. All in, we got 8 hours of use, shy of the advertised 10.

We know that we would have gotten at minimum another 30-45 minutes out of it if we spent less time on video calls, so overall I still got a full day out of the 9i. When it did dip to zero, we tested the rapid charge capability, and sure enough after being plugged in for 15 minutes we had about 2 additional hours of usable time. Perfect for the 20 minutes you may have to plug in waiting for your flight at the airport, or when you have very little time to charge up before your next call.

Overall we really enjoy the Lenovo’s 2022 redesign for their flagship Yoga. We find ourselves digging the rounded metallic edges over the old “thin and sharp” design, and do feel it’s less “stabby” for lack of a better word when running folded over in tablet mode. The i7-1260P is a powerhouse of a mobile processor that runs this unit with impressive speed and snappy response, and the high-quality screen makes working and consuming media easy on the eyes.

Add the included sleeve and pen for notetaking and this is qualifies as a real flagship device that’s useful for personal and work use too.

April 4, 2022
Our Review Process
Latest Reviews
Where to?