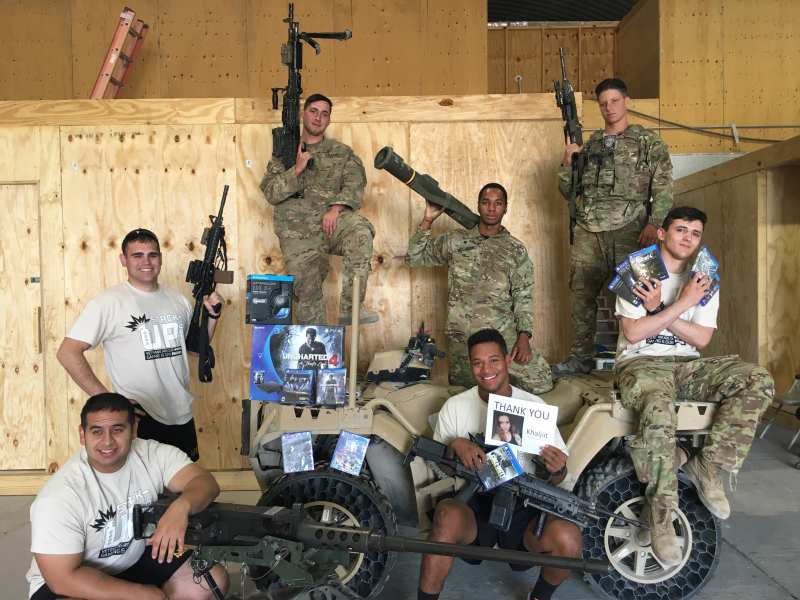 Back to the show floor means back to spotting members from our favorite convention red-shirted army, the folks from Stack Up. They’re a military charity organization that support service members through gaming. We talked to them first in depth during last year’s PAX Online, and you can check it out here for some more info on who they are and what they do.

This year we were able to swing by and chat with them in person, and talk about some of the work they’re doing and celebrating a big milestone and donation record – $1 million in cash donations in 2021, which is pretty damn cool.

We spoke with Christy Bowman (aka “Tatoress” online) who works with influencer relations to check in and talk about Stack Up’s growth. She’s the one that brings in streamers and lends her guidance on running charity streams. So what does she think was the cause of their smashing success in ’21? Simply stated, awareness. “Being out in the communities and letting people know that we’re here and supporting veterans, and veterans speaking out and letting them know that we’re here, and have helped them,” she says. “Streamers helping to spread that word and sharing about Stack up and all the things we do on their channels, and you know, that spreads like wildfire.”

And she’s got the numbers to prove it. Out of aforementioned $1M in cash donations, $800k of that was raised directly by streamers. That cash directly helps to fund Stack Up initiatives like shipping out supply crates and their Air Assault program, which provides no-cost travel and a VIP experience to events and conventions like PAX East, where an Air Assault group was already in attendance. “Finally cons are back! We have a group here this weekend thankfully, so we’re able to start doing them again, and it’s just been great to see.” In addition to PAX cons, they’ve got TwitchCon on their radar this summer, and their next convention will be MomoCon in May. “So yeah, the calendar is filling up, and it’s awesome to hear Dave talk about getting the veterans lined up for those events.”

We also got to speak a bit about their Overwatch program – a 24/7/365 service on Discord to help veterans acquire mental health, therapeutic, financial and support services, or be a presence if they need someone to talk to with the ultimate goal of veteran suicide prevention. And that access was doubly important during lockdown periods over the last couple of years.

“When you look at a group that’s already feeling isolated and disconnected from their communities and then throw a pandemic on top of that, we 100% saw the impact of that in our Discord. Our Overwatch program is just where someone can come in and there’s always someone available that’s trained in mental health crisis and suicide prevention to help them talk through the things they need to talk through. We have individuals on call that can come in and step in if it is a duty to report situation where we fear there might be harm done to themselves.” The Overwatch staff make sure that there’s never a time someone can’t find someone to talk to. With the increased numbers over the past year they have been working through holidays and making sure all shifts are covered to ensure there’s never any downtime. “They’re just on point and wonderful and go through a lot to be there for our veterans.”

In addition to these programs, local volunteer communities in their local Stacks also take the time to run movie nights or gaming nights to give veterans some additional connection to their communities.

So after all that, back to the literal million dollar question – with $1M in 2021, is there a hard goal for 2022? Well with the streamers raising $800k last year, the hope (well, at least Christy’s) is that the streamers raise $1M on their own. “Our streamers in the community are fantastic and work super hard and do great things on their channels to raise money for our veterans.”

To learn more about Stack Up’s programs to support our service members and how you can help, check them out at https://www.stackup.org/. And as always, look out for those red shirts at your next convention!

April 27, 2022
Our Review Process
Latest Reviews
Where to?