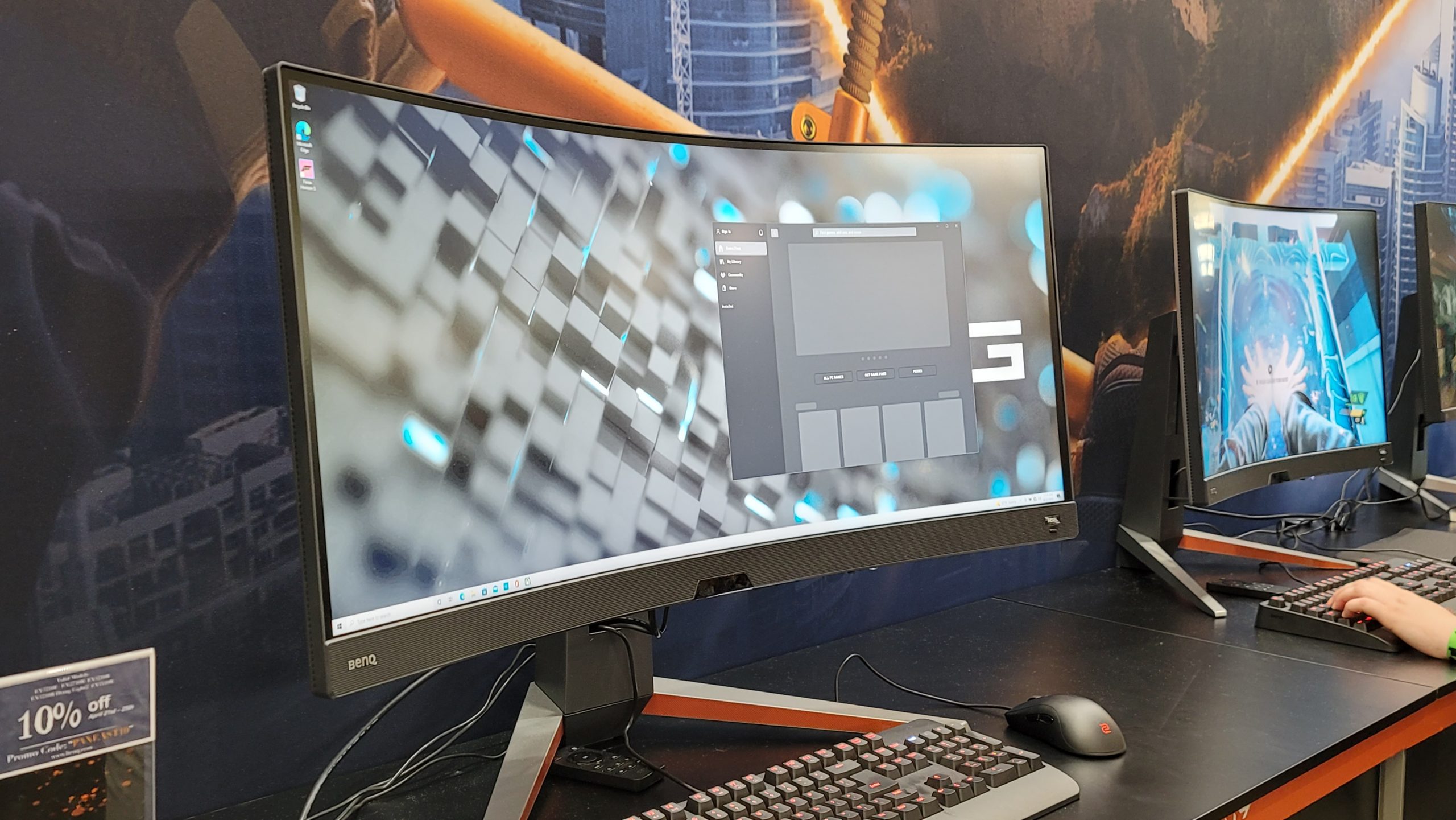 No matter what you game on, we all agree that the visuals are important. So whether you’re piping out over HDMI or DP, the monitor you’re hooking it up to counts. BenQ had more than a few to show off during PAX East, both from their Mobiuz gaming line as well as their Zowie brand, which is targeted specifically for e-sports. And yes indeed, as I learned, there’s a big difference between the two. We got to speak with Alan Song for Mobiuz and Kevin Wang for Zowie to get some inside details on the two.

Mobiuz is a relatively new brand in gaming monitors, a sub brand released by BenQ just a couple years ago in 2020. But they did bring a ton of variety to the show floor in size, price, and form factor. Some of the higher end 4K models were hooked up to PS5 consoles instead of PC’s, which we found a bit surprising. But they had the specs for console gamers – HDMI 2.1 support, 4K resolution, 120Hz refresh, and HDR 600, with their 32″ EX3210U model retailing at $1,099. “Nowadays, console gamers – PlayStation 5 gamers – they’re looking for monitors that support 4K and support 120Hz refresh rates,” Alan said. “So more and more brands are staring to provide this kind of offering for them.”

We got to see some curved models too, with a couple of them curved at 1000R, which is the highest curvature we’ve seen in a panel. It’s meant to give gamers more of a sense of immersion, especially in those widescreen models. “Some people prefer the ultrawide so they have a wider field of view. For flying games, driving games, it will feel more realistic.” For those higher end models, the front bezels feature 2 speakers with an additional subwoofer on the back for an impressive 2.1 audio system. This is a great feature for those console gamers looking for a high-end monitor, since it doesn’t require additional speakers for their setups.

But 4K high-end models aren’t the only options – “Of course there are a lot of people that don’t want to play in 4K because 4K requires a high-end graphics card, so we offer different resolutions.” To that end, Mobiuz monitors also come in FHD as well as QHD/WQHD resolutions as well.

“For the entry level user that is the full HD one. If you’re a casual gamer, you’re not looking for 4K or QHD – you’re looking for the basic models. That’s what we have and provide a competitive price,” we were told. “It doesn’t come with speakers because we’re trying to make it more competitive in terms of price.” Their most affordable FHD model comes in at only $279, but that still provides HDR capability and 400 nit brightness. The most eye popping design came from a Dying Light 2 partnership that featured key art printed on the back of their their 32″ QHD 100R curved model for $549 – and that price includes a copy of the game. I asked about other partnerships or allowing users to design their own monitors – “We’re thinking of having a designing contest so people can create what they like and pick the one with the highest votes, and make a special edition for the winner.” So stay tuned if we get more info on that!

Regardless of your price range, there is a Mobiuz monitor for you. And all models from top to bottom come with a suite of eye care features to protect your vision. “There are two ways of turning on a panel – one is PWM and one is the DC dimming. With PWM your panel will be a little bit flickering, so for BenQ we all use the DC dimming. So every model you see the front bezel there’s a block sensor, so it will automatically will adjust the brightness and contrast of the screen.” In addition to that users can click in to low blue light mode to prevent eye strain.

If you’ve been following for me for a while you all know that i’m a career IT guy. I actually discovered Mobiuz monitors last year from the eye care features – and have deployed them for some of my users that have eye issues. That gives it a lot of crossover value for your office or home office.

The Zowie brand focuses on e-sports, which I learned requires a far different priority list than for non-competitive gaming. No curved models, no frills, no lighting, just features that are tuned to pick up every and any tiny edge you can get to be more competitive. For you sports fans out there the Zowie philosophy lines up pretty well with the Raiders’ legendary Al Davis: “Just win, baby.” And you can get there from under $200 up to $600 for their top end screen. Physically all Zowie models have greater swivel, height, and tilt control than your standard gaming monitor. Why? “Most of those professional players use the monitors and keyboard and mice combination at an angle” according to Kevin. “Professionals have extreme offsets. So how that fits with us is you can swivel the monitor so you can have the base angled to fit the keyboard flat and not impede on your mouse movement.”

The monitors also have flaps on the side to prevent distraction from multiple sources. It may seem overkill to the everyday gamer but they are designed so that there’s some home benefits as well. “On stage those flaps help block out any camera light, ay sort of LED light or RGB light, whatever it may from different media that may be there in an in-person event. At home, if you have a setup where there are a lot of lights to keep your room lit, or RGB behind your monitor for example, it can help block that out.” Then there’s the technology – normally we would hear refresh rate numbers and be done, but there’s more to it than that. “Our monitors will start at 144Hz refresh rate. Then we go up to 240, and 240 is what most professional players are using today,” Kevin told us. “We have 240Hz in addition with our smoothness technology which is called ‘Dynamic Accuracy.’ You combine that – the DyAc and the 240Hz will help smooth everything out even further, so when there are people moving on your screen, there’s less motion. You can see heads a little bit easier.”

And isn’t that what it’s all about in the FPS genre?

One of the bigger technology surprises is that Zowie is still using TN panels while most other brands (including Mobiuz) are using IPS technology. There’s a strategy behind that though. “TN panels have been proven to have response time superiority. So we would have faster response time than someone else with an IPS at 240Hz.”

So as you can see, Zowie leaves no stone unturned for getting users every competitive edge. But there’s one feature that seems more educational than anything. You can store, share, and download monitor and keyboard/mouse settings through their XL Settings to Share system. Not only can you upload your own saved settings, but download settings from pro players to experience their setups and pick up a bit on your FPS learning curve.

Overall we think BenQ gaming is really making some strides with their Mobiuz line and continuing to tune and microtune their Zowie e-sports screens. They’re a great addition to the BenQ portfolio, in addition to the Designer and Business monitors from them I have used before. As I mentioned, I’ll continue to deploy Mobiuz monitors for my business clients because the eye care features make them strong choices on their own, but I’m also eager to get my hands on a Zowie and see if I can hone my oh-so-poor FPS “skills” for lack of a better word.

For more info on Mobiuz and Zowie, check out the links below:

April 28, 2022
Our Review Process
Latest Reviews
Where to?