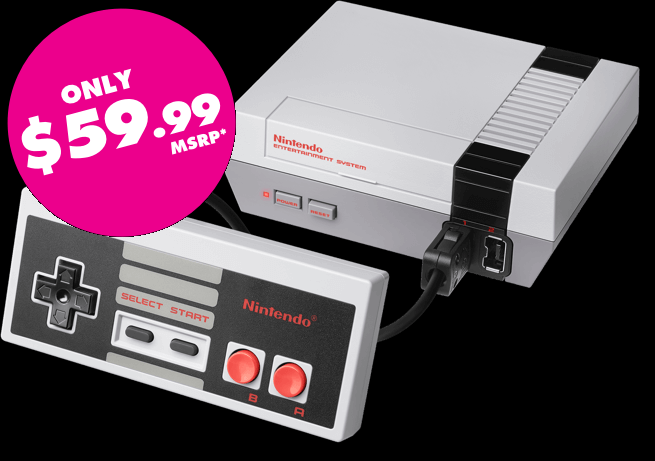 April 21, 2017
** NOTE: During the time of writing the SNES Classic had yet to be announced, and as such Nenedamus was still awesome and ahead of the game **

Nostalgia is wasted on the young. So many things in gaming these days are sequels, or updates, or HD special editions, or whatever the hell most companies feel like repackaging to sell to the old folks like me. And thankfully for something refreshing from that formula, the NES Classic was released – a mini console that thanks to today’s technology was able to pack 30 classic games from Nintendo’s 8-bit era into one convenient unit. It opened for $59.99 and it sounded pretty good at the time. Classic Nintendo IP like the Mario and Zelda series along with Metroid were now plug and play, with many other popular titles rounding out the 30.
And those positive vibes lasted for roughly 38 seconds.
There was absolutely no way in the infinite 8-bit hells that this price was going to remain steady. Just like all other re-issued nostalgia it was going to be bought in bulk, stocked out, and sold to gouge the highest bidders for profit. I saw the device go as high as $600 on eBay (a 1000% price hike for those playing along at home) and people jumping at the opportunity to have one. 1.5 million units were sold in just a couple months on the market. Which turned out to be… well, all of them.
So now we come to the recent development in the NES Classic saga. Recently Nintendo, without any warning or heads up, stopped production on the mini console a couple weeks ago. They have since announced that they would cease production in not only the North American region but in Japan and Europe as well. What happened next, though, surprised the hell out of Old Man Nene though for such a simple thing – the gaming community, at least what I’ve seen on social media, lost its damn mind. But it didn’t make any sense to me. Most kid gamers my age still have our NES and games intact. Younger gamers have online emulators and ROMS. Why was this such a big thing in the gaming community that I simply couldn’t bring myself to care about? What was the draw? Well kids, to all you Aging Gamer faithful that listen to Old Man Nene in his rocking chair tell you how it used to be – I can only offer the immortal words of DJ Khaled:
Congratulations. You played yourself.

It’s basic economics and mindshare. Firstly, Nintendo never meant for this to be an ongoing product – why would they when the Switch was just around the corner? This was always going to be special edition and never a permanent offering. The number of units manufactured was set to reflect that. Look at any supply and demand scenario – the second the “super rare” tag gets slapped on an item the price spikes like a rocket, and people are willing to pay more for a scarce product. What Nintendo did was create an artificial demand and gamers responded precisely the way they were supposed to.

It’s like some small restaurants that have lines for blocks leading to their front door. Sure it’ll draw more people and generate more demand, but they don’t tell you that there’s only 10 seats inside and that’s what causing the line.

[Side note: that was an angry morning in Philadelphia for Old Man Nene. I just wanted some pancakes.

Secondly, they created an environment where gamers would have Nintendo control every free thought in their brains for the foreseeable future. The NES Classic dropped in November 2016. The Switch hit shelves four months later in March 2017. Look at the timing of those events, including the NES Classic price gouge in the middle. This is not a coincidence. It could be argued that hands clamoring for the NES Classic could ultimately lead to a Switch sale. Bummed that the NES Classic is done for? That 8-bit longing, along with murky rumors about a virtual console on the Switch, could be enough mind control to have gamers shelling out fistfuls of cash in the future for games they bought already via the NES Classic. I mean it’s not really that far a stretch… I’m sure there’s a bunch of Square-Enix fans that have 7 different versions and releases of Final Fantasy IV.

In the end, my prediction is this: The NES Classic is dead, but I can see a SNES Classic in the not too distant future.

So go ahead and be mad that you couldn’t get an NES Classic. Celebrate and rejoice if you managed to snag one. But remember this kids – in the end we’re all just logic boards in the gaming machine.

[And while I cannot condone a workaround that theoretically involves easily constructing a Raspberry Pi powered RetroPie DIY unit, legend has it (seriously you guys) would only take an hour to get together, be ultra cheap and allow you to play your old 8 and 16 bit games. I can also neither confirm nor deny such things exists.]

April 21, 2017
Our Review Process
Latest Reviews
Where to?