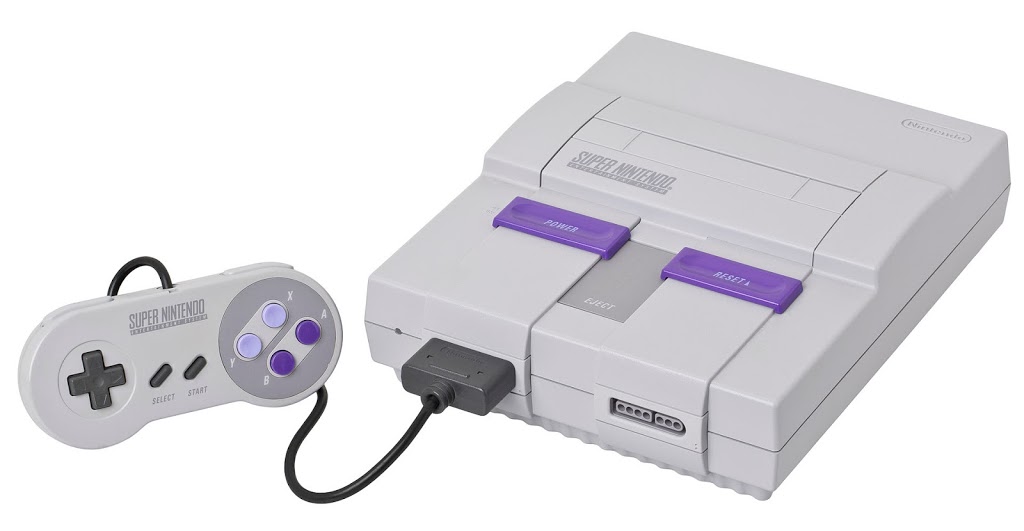 [Originally published on Sub Cultured as The Super Nintendo Turns 25]
The Super Nintendo – or the SNES for short – celebrated its 25th birthday this week. Granted this may not mean much to the Sega faithful from the 80’s and 90’s, but as I’ve mentioned in previous posts I was a Nintendo kid growing up. My formative game time came courtesy of the original Nintendo Entertainment System. The Super Mario Brothers / Duck Hunt double cartridge for NES sank so many of my hours that it would be tough to tabulate how many fire flowers I digitally ingested or how many rounds I popped off on my Zapper light gun. When I discovered RPG’s and action/adventure games, that would put my hours logged shooting ducks to shame. I liked the obscure stuff – the stuff that none of my friends had, so I had some stock in trading cartridges with them like Yo! Noid and Seicross. And of course, my personal favorites Final Fantasy, Dragon Warrior, The Legend of Zelda, Ninja Gaiden and The Goonies II.
My friends and I all thought we were in the golden age of video games, but little did we know that the next-gen console introduced at the turn of the decade would change how the game is played forever. And you know, we were kids. That’s not an exaggeration even given my penchant for hyperbole – in 1990 the Super Nintendo, affectionately known as the SNES, changed everything.

Back then terms like “16 bit” didn’t really mean much to me – all that I was able to see then was how I could do more things, and how games were deeper, and how the technology now existed to make better music and more memorable stories. We had a unit at home now that brought the flash of the arcade to our living room, and gaming went from single player to social time with friends. But still, what was so special about the SNES that brought about this change? It even overtook the Genesis, its 16-bit rival from Sega, which was already on the market with a number of games available.
First off on the list of excellence was the SNES controller. This was the first console controller to feature six buttons with triggers on the corners to make gameplay more complex and fun. This stomped on the Genesis, which only gave us 3 buttons to play with. Sega was forced to make a 6 button version in 1993 to keep up. Anyone who’s played Street Fighter II Turbo and tried to pull off Vega’s jump dive on the Genesis will more than surely attest to what kind of pain was removed just from having more buttons. And that was one of the things that made it great – a six button controller made arcade fighters playable without a cabinet, and more importantly, without the aforementioned pain. It played right into the control scheme of the Street Fighterseries with 3 punch and kick buttons each. Even Mortal Kombat titles needed 4 to be played cleanly – 2 each for punch and kick buttons. So instead of standing around in an arcade bleeding quarters into a game for play credits, round robin “winner keeps playing” sessions were how we did things. And good lord was it fun – the multiplayer of our time.
The controller setup was copied and used as a standard for generations to come. Look at your current PS4 and XBOX One controllers. They may have a couple of extra triggers and thumb sticks but what is the core control? 4 buttons, arranged in a diamond, with triggers on the side. Even though it was a big jump from the A and B buttons on the 8-bit NES, it let players have a control method that became second nature.
The controller was only as good as games that were made for it, and the titles pumped out in addition to arcade fighters for the SNES were legendary. Upgraded games with familiar characters came to life on the screen, starting with the Super Mario World title that shipped with the console. That game on its own took existing IP and brought it into a new generation with scrolling levels, a vast world map to travel and multiple power ups.

Even the pure graphical power, clearly able to be seen when dozens of cannons with moving projectiles came at you on side scrolling levels in World 8 left a player wondering what else this machine could do. The Legend of Zelda was upgraded and we had a new adventure with A Link to the Past, arguably one of the greatest video games of all time. And with each game release, developers showed what was possible by pushing the SNES engine – Pilotwings. StarFox. Donkey Kong Country. F-Zero. Each great in their own way, each memorable for different reasons, and each being a genre flagship on which future titles for future systems would stand on the shoulders of. It was quite literally a Super Nintendo. Better tech meant more colors, music with enough tones to provide mood, and it even dabbled in 3D gaming with the help of the SuperFX chip (self contained without the add-ons Sega was investing in, I might add).
And I must make special mention of one of my favorite games of all time, Uniracers. Thanks for wrecking that one for us, Pixar Legal.
Final Fantasy fans in particular were given installments II and III in the series, re-branded from the Japanese IV and VI. Again, these games opened the door to what was possible when technology allows for good storytelling, and elements and themes of these games are even visible in the upcoming Final Fantasy XV.
The SNES became more than just a game console. It was a solid proof of concept that games as a medium could tell a story and draw players into a virtual world where they could connect with their characters, require them to even take notes on some of the more complex puzzles, and give greater choice to the player on how he or she wanted the game to go. It launched an era that made games evolve from mindless entertainment to a real digital experience. And from indie developers to triple A studios, it’s a legacy that still influences what a game should be.

August 25, 2016
Our Review Process
Latest Reviews
Where to?