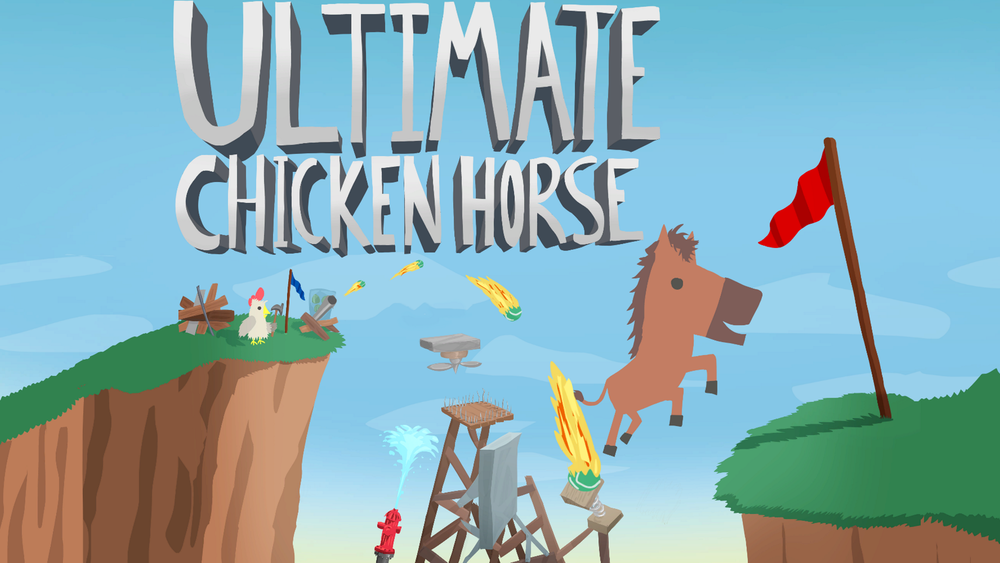 What’s in a name?

When I saw press and previews for a game called Ultimate Chicken Horse, how could I not go and check it out at the Indie Megabooth? The humorously twisted minds at Clever Endeavour, the devs behind the game, explained to me the concept of what into the title after talking to them for a bit while waiting my turn to join the fray. Inspired by the schoolyard basketball game HORSE, the game has players alternate between placing traps, gadgets or platforms and running through their communal creation toward their goal. So picture playing a game of Chicken that has all the oneupmanship elements of Horse, add 4 player action playing as barnyard animals and that’s the game. In the end, Ultimate Chicken Horse made perfect sense.

Oh, and I should mention it’s one of the best accidental instances of economics and game theory that I’ve ever seen. The whole thing, though not by direct design according to the developers, plays like an extremely well crafted 4-way prisoner’s dilemma.
Don’t let the playable character field of adorable barnyard animals fool you when you pick – the premise of UCH is to make your way through a deadly obstacle course of your own making, while both working with and competing against three other players. As each round begins, the players open a “party box” of deadly contraptions – traps, explosives, and other malicious weaponry – and each player has to choose one. Each player places their item onto the course, with the hopes of their strategy letting them get through to the end while sending their competition to their untimely end. Round after round whoever amasses the most points is the winner of the contest. Take a look at the trailer to see what I’m talking about.

So here’s the game theory-esque twist – players have got to keep limits and payoff in mind. If the obstacles are too hardcore, no one is going to make it through and nobody gets any points. In the other hand, make it so easy that everyone gets through without taking any damage and again, no one gets any points. The gameplay once the obstacles are placed is natural enough for anyone to jump in and get on board. Directional controls, jumping and ducking are all someone needs to try and make their way through the gauntlet.

And for me at least, that’s what led to an extremely fun game experience. I was set up with two strangers on the con floor I’ve never met before and the lovely and talented Jenesee Grey of the Grey Area Podcast, and the first couple rounds were understandably quiet while we blazed through our pseudo-team made courses without taking any damage and receiving no points. Then came more elements from the party box being stacked onto the course, and more screaming and cheering from our band of merry animals – a combination of cheers of glee as someone that made it through, the tense shrieks of pain when someone got 99% through and got nicked by an obstacle, and the very vocal strategy meetings between rounds. This included screams of “CHICKEN IN IT TO WIN IT,” “GO LIZARD GO,” and “TO HELL WITH THAT FLOWER” until I was hoarse, and high fives when one of us made it. And yes, I did in fact play as the chicken, which was dictated by the universe for someone who runs a publication called “Technical Fowl.”
But of course, through the teamwork, we were all still trying to kill each other. My hats off to the new frenemies I played with at PAX East. The party mode we were playing isn’t the only way to play though. Creative Mode opens up the entire inventory for players to choose from. Free Play Mode enables a single player to design levels from the full suite of objects, which they can save and share online. There’s also a solution for players who don’t have 4 controllers; Couch Hot Seat Mode which is like Creative Mode, but turn-based.
Ultimate Chicken Horse is out on Steam and the Humble Store for you PC enthusiasts that like to play online. Later in 2017 though it’ll me making the jump to console on PS4, Xbox ONE, and Nintendo Switch. And that’s what I’m really looking forward to more than online. Being one of the old school guys that grew up playing round robin console games from 8 bit consoles as a kid to the 128 bit consoles in college, some of my most fun memories with my friends were gaming nights. And that’s what this game is going to be perfect for on console – if Jenesee and I could have that good a time with 2 people we’d never met before, imagine what kind of fun you’ll have with some pizza, some beverages, and your friends at the house.

March 27, 2017
Our Review Process
Latest Reviews
Where to?