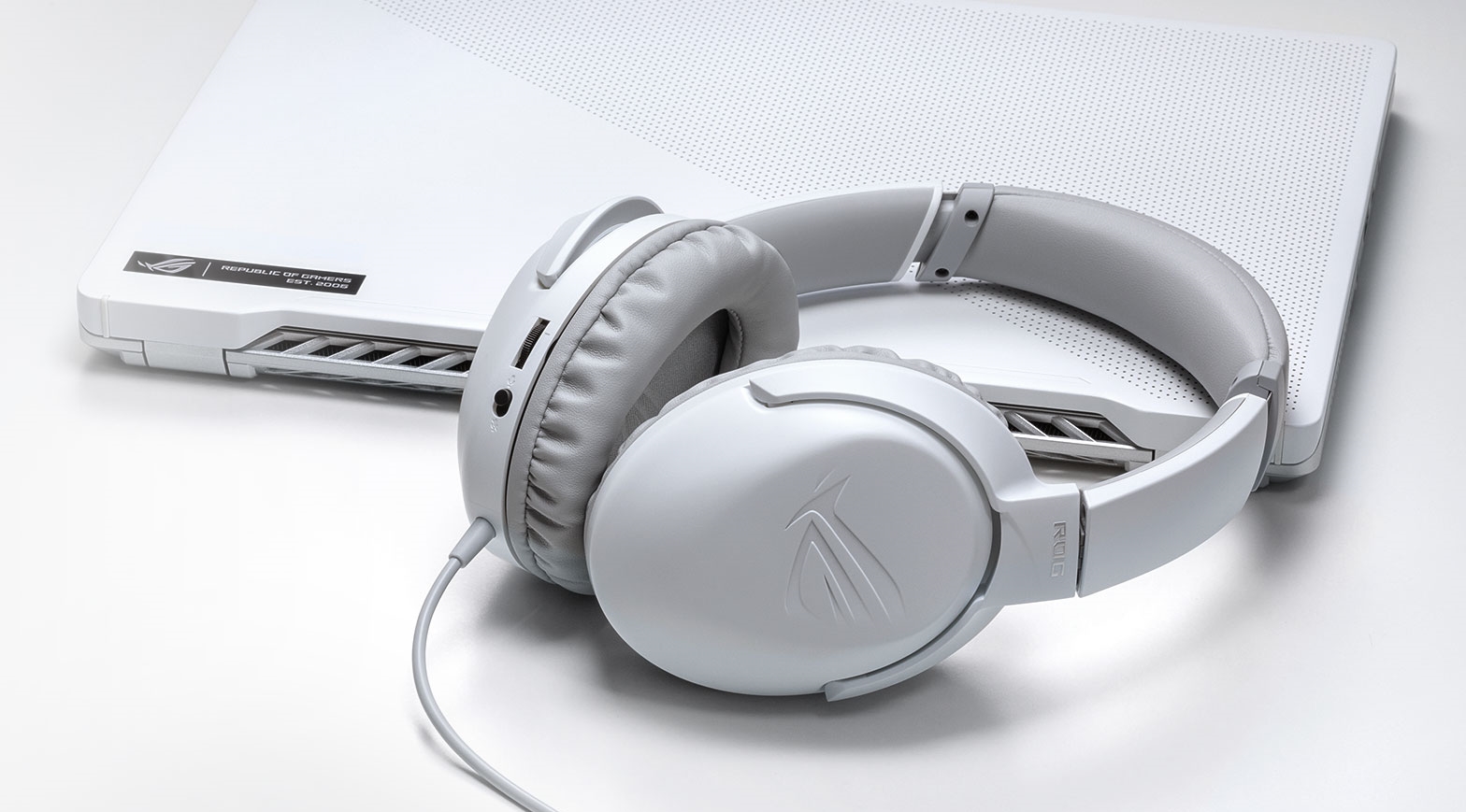 Foldable and easy to travel with

Today we’re looking at Asus’ ROG Strix Go Core headset in Moonlight White – a special edition for a model that usually comes in black. The specs are of course the same as their darker sibling, and the “Go” in the name tells us that this is a lightweight model built for easy travel and storage. Able to fit most budgets at $79.99, here are the basic specs before we get into it: Like we said at the top, this is the same ROG Strix Go Core headset that was originally available only in black reskinned to match their “Moonlight White” white/grey colored line of peripherals. This in its own is great for folks that like basic lighter-colored peripherals that may feel that black is too traditional and RGB LED is too over the top. The headset itself is a basic lightweight plastic design, with good cushion under the top of the headband and in the ear cups as well on top of its 40mm drivers. ROG branding is very subtle on the outside of the cups and headband, following with the aesthetic theme of not being too flashy or over the top. Overall it’s a very clean look. On the left side is a removable unidirectional boom mic with the volume and mute controls, with the entire earcups themselves able to swivel flat and even hinge inward to minimize the space it takes up to carry, making it easy to pack and travel with. The 3.5mm audio cable is hard-attached to the headset though, so you will have to wrap around and use the velcro cable tie on the end to make it fit cleanly. The single 3.5mm is fine if you’re using it with a laptop, but in case you’re working with desktops with separate mic and audio lines there’s a 1.2m Y-cable in the box so it can still work for you on your home gaming rig or even your office desktop.

In addition to the good cushioning, what makes it feel super comfortable and light is that it’s only 252g, one of the lightest in Asus’ ROG line. The wireless “Go” headsets weigh in at nearly 300g each, with heavier-duty sets like the Delta and Delta S approaching 400g. All in, this is a very comfortable and light headset that is ready to travel, and doesn’t take up a lot of space while doing it. It doesn’t come with a carry case like some of Asus’ other ROG headsets, but at $79 this is more of a budget gamer than some of their other high-line products. With those lightweight features, the Go Core was very comfortable to wear for long sessions of gaming or media binging. I was able to watch an entire film without feeling like I had to take them off and also was able to game for 3 hours at a shot without feeling any pinch or pain. That’s something you won’t get with your heavier sets.

The operational downside we found is that there’s no equalizer software to adjust what you get out of the headset. The Delta for example can be configured through ROG Armoury Crate, but we see that with portability and speed in mind the Go Core is configured to plug and play out of the box and go instead of supporting super customization.

What’s nice is that the boom mic is removable, so we can comfortably also test these as a lifestyle headset in addition to using it for gaming. But it is a gaming headset, so first thing’s first. Starting with PC, we loaded up Diablo III. DIII always a lot of overlapping sounds especially when the screen is full of mobs and effects, so it’s a great PC testbed. The virtual 7.1 definitely provided true sound positioning – mobs could be heard from whichever direction they were coming from, and spells/projectiles shot from one end of the screen to the other definitely had position-accurate sound. When running a rift with hundreds of mobs, sound/spell effects, and movement sounds, everything was indeed able to be independently heard, especially in the highs. While the bass was able to be heard well during the action, we didn’t get that earthshaking rumble we would have gotten with other headsets while our Barbarian declared hammer time with seismic slam, or called up an earthquake.

Next up – console with Assassin’s Creed: Valhalla on the PS5. The 3.5mm connection means this can be plugged right into the controller for both PlayStation and XBOX consoles to switch sound over from your TV to your headphones. We got good positional sound with crisp mids and chirpy highs, but again we didn’t get that deep rumble from the bass. However, every bit of bone breaking and human wailing from Eivor’s excruciating executions were audible on every level.

For cinema we put on the headset for the red circle scene in John Wick into when he’s attacked at the Continental by Perkins. Every small caliber shot was audible with a nice shrill ping, and impact from melee combat still came through clear along with the tunes of KALEIDA and Le Castle Vania as the soundtrack. The only audio issue we had was that the dialogue got washed out a little bit with all of those layers. On scenes where the was dialogue and not a lot of action though? No problem.

Overall Asus’ ROG STRIX Go Core headset in any color may be a bit more than what one might consider a “budget” set of headphones, but for a little bit more you have a pair that’s super lightweight and easy to travel with. The 3.5mm connector means you can use this on most devices, whether your gaming loyalties lie with PC or consoles. We wish this had some equalizer software to go with it to really fine tune it but like we said that doesn’t mean we don’t like the out-of-the-box plug and play solution the Go Core provides.

You’re going to get bigger and deeper sound as you move up in Asus’ ROG line into the land of heavier sets with 50mm drivers, but we like what we get for the money with the Go Core.

And that it’s available in moonlight white means this is a great and inexpensive headset to fit that work life balance we all so desperately crave.

January 18, 2022
Our Review Process
Latest Reviews
Where to?