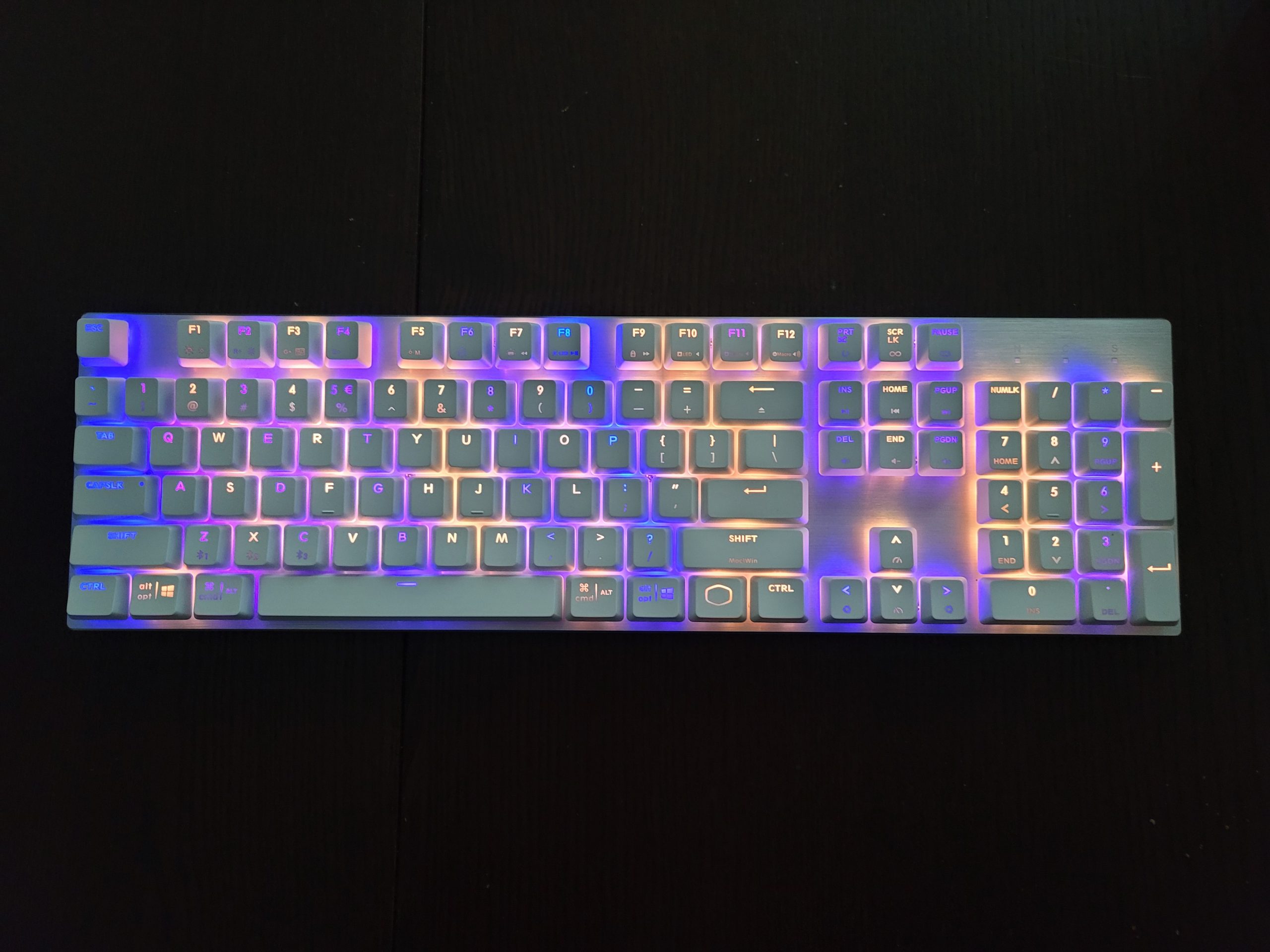 Noted improvement in feel over the previous generation

Options for wired and 3 Bluetooth profiles

Had to plug in to get MasterPlus going on the PC

Cooler Master’s new generation of SK keyboards show a change from the previous generation, which we saw when we test drove the SK622 60% gaming keyboard last week. This time we’re looking at the SK653 – same style but at full size with a tenkey numpad. It’s not available for purchase yet, but you can see some detailed specs at Cooler Master here until it is. The SK653 sports the same changes from the SK650 the same way the SK622 changed from the 621, where Cherry MX was traded in for low-profile TTC switches. You still have your choice between red, blue, and brown switches though each with their own tactile profiles. For our review model, we played with the blue switch edition. On design the SK653 is literally  the SK622, but bigger. With options in Gunmetal Grey and Silver White, it comes with a stylish brushed aluminum deck with floating keycaps and a super clean finish. Thankfully the key layout is a bit easier to deal with on a full size keyboard as opposed to 60%, so you don’t have to double up on keys to get full function.

As is the Cooler Master standard, on the fly keys allow you not only change the saturation of red, green, and blue LED’s, but switching between three Bluetooth pairings and four user profiles.

Three Bluetooth profiles are super useful since the SK653 is compatible with Windows, Mac, and Android, and moreso if you have multiple devices to use a gaming keyboard for. For us the three pairings were for a desktop PC, a laptop, and an Android tablet. For those that want to keep it wired,  the keyboard comes with a nice color-matched USB-C to USB braided cable. Bluetooth pairing is pretty straightforward, and programming your profiles for lighting and macros is through CM’s MasterPlus software.

We’re not sure if it’s just on the silver white model that we have, but the  LED’s are nice and bright, and look great against the brushed aluminum deck. All around this is a very well put together unit with solid construction and aesthetics. The SK653 follows the same “stadium seating” keys we saw with the SK622 instead of completely flat keycaps like the previous generation had. Actually having feet let it sit at the right level with just the right curve to make typing comfortable. That said, the choice you have to make is on the switches.

We’ve got the TTC blue switches this time on our test model, and having tried out the reds on the SK622 we definitely have some comparisons. The blue switches are clickier and provide a lot more tactile feedback, but by our hands required a bit more actuation force while striking the keys to register. This was perfectly fine doing work or for non gaming use, but for us personally we found that the red switches were easier to on the gaming front, especially when a lot of keys had to be pressed in quick succession.

Unlike the SK622, this one isn’t portable and most people are going to have them sitting on their desk and not moving too much. This includes folks like us that have seen their work get shifted to work from home who try to have a single set of gear to do everything. For me the red and brown switch options would make this a “keyboard for all” including my office work.

In short, this is a full-sized SK622. Same keys, keycaps, action, and low-profile switch options. The only real difference between our run with the SK653 and the SK622 was blue versus red switches, which is what makes the real difference in experience. Do you like your keying clicky, soft, or silent? That option is really up to you. The release date and price on this are still TBD, but we’re still calling this one a winner.

July 28, 2021
Our Review Process
Latest Reviews
Where to?