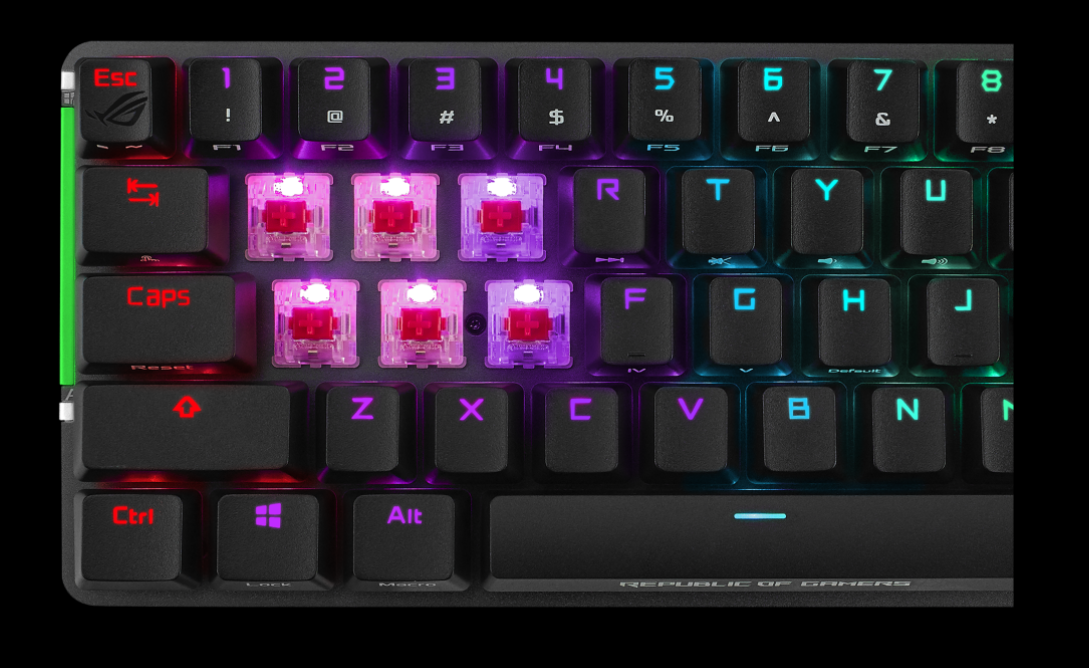 High level of customization with per-key settings and macros

Armoury Crate could be a bit lighter

Easy to graze the LED slider

Today we’re looking at Asus’s ROG Falchion NX keyboard available with multiple switch options at $149.99 at the Asus store and Amazon. It’s an updated 65% mechanical version of their Falchion keyboard, upgraded with new NX switches under the caps. We got to play with the NX reds in our review model for both work and play, and had a lot of fun with it while we did. The Falchion NX measures in at 305 x 101 x 38.5 mm at about 520g, making it slightly larger than other keyboards in the 65% class, being listed specifically as 68% of a full size keyboard. That still makes it light and small enough to pack to game on the go, and also fits quite well into my IT pro toolkit for checking in on servers and systems.

Aesthetically it’s not over the top which I appreciate, with each key’s function-key-activated function printed on the front of the keycap so they’re easily seen. Each key is programmable, and that includes the tactile slider on the left side, which can be programmed as volume control, app switching or an additional macro key. It also serves as a battery indicator, turning to red when your juice dips below 20%. The slider and the RGB profiles can be programmed through the Armoury Crate software. The software itself could be a bit more friendly, but still lets you customize your keyboard and sync them with your other ROG products using Aura Sync with up to six profiles.

We don’t mean to say it’s bad – just a bit heavy. It just takes some additional modules to access full control. For example to get your per-key programming, you need to additionally download and install the Aura Creator software. The keycaps are also angled in a “stadium seating” sort of design, forcing each row of keys to be able to be struck flat instead of at an angle, eliminating the risk of a misfire if your finger slips.

Included in the box is also a hardcover case to protect the keyboard during travel, or to serve as a tray to set the keyboard in while in use. It does raise the keyboard a for easier use, but since it has built-in feet it’s not necessarily needed to operate comfortably.

Without lighting, Asus advertised 450 hours of battery life running on wireless, which I couldn’t reach during the period of testing but I fully believe. With the LED’s on though, and depending on how high you set the brightness to, I got about 60 hours pure use, which still ain’t bad. I didn’t have to plug it in with the included USB-C to USB-A cable for a few days, where I’ve had other wireless keyboards that needed juice in under two days.

That cable lets you use the Falchion NX in wired mode while charging, and can also operate in 2.4GHz wireless mode using the housed USB dongle in the back of the keyboard. There’s no Bluetooth mode though, which is helpful if you sync keyboards to your tablet or mobile devices.

Asus is using their own NX switches on the Falchion NX, a change over the previous iteration of the Falchion. The newer ROG NX red switches are similar to other linear reds on the market with some improvements on their own line, with a 1.8mm actuation point and 45g of actuation force for fast input. To us that makes it easier for us to have a single travel keyboard that pulls double duty for work and play. Keep in mind though for those of you that want a more tactile bump or clicky response, the Falchion NX is also available with ROG brown and blue switches – so you do have some options.

As always, keyboards of different sizes require learning curves to get the finger spacing right before you can really start using it properly, but that was pretty short on the Falchion NX. The one thing I had to really get used to was that the Insert / Delete / PgUp / PgDn keys were in a vertical line above the right arrow key, meaning the backspace key is shifted a bit to the left instead of being in the corner. Once we got there though, traipsing through games was a breeze, with the red switches providing instant input for anything I was doing, whether it was strafing with WASD or typing up reports for work.

The ease of actuation on the red switches also let me type and play for longer sessions more comfortably, with nearly no strain on my wrists or fingers.

The tactile slider is a bit easy to graze though, letting me accidentally change volume a few times. This is where using the hardcover case as a tray came in handy. There’s a cutout for the slider that prevents accidental hits.

Asus packs a lot of features into this small keyboard and gives the user a number of configuration options. The tactile slider on the left side is a cool addition, and the action with the NX switches is better than other red switches I’ve played on. The smooth switch action and comfortable keycaps make it very easy to use not just for gaming but for work as well. At $149 we’re also looking at a price point in line with other models like Razer’s Huntsman V3 which also runs linear switches. Overall it’s a great little keyboard that can play.

December 29, 2021
Our Review Process
Latest Reviews
Where to?