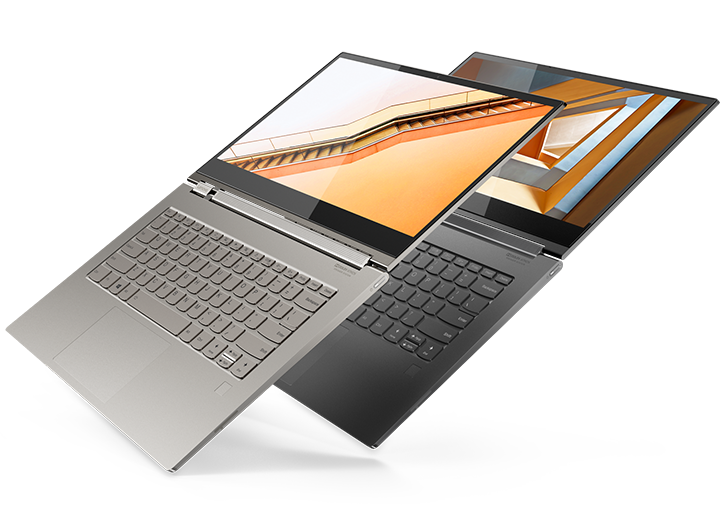 I was super excited to try out the C930, Lenovo’s flagship 2-in-1 ultrabook in their Yoga line. Granted, models of the Yoga C720 and C730 do offer models that pack nVidia GTX graphics where the C930 comes with integrated graphics, but my excitement was in the prospect of a jack-of-all-trades laptop. A single machine that was lightweight, 2-in-1 with tablet mode, and could do some light gaming without having to carry around a heavier rig. I had a lot of fun with this one, far more than I thought I would. Starting from the unboxing, in my head this was going to be a mental comparison between the Yoga C930 and the 3rd-gen ThinkPad X1 Tablet (you can read that review here). I said then that the X1 Tablet was competition to the Microsoft Surface Pro. If that’s the case, then I would pit the Yoga C930 against Microsoft’s Surface book. It doesn’t have the same kind of removable screen, but it is lappable with an actual base and hinge, and can be folded over to go into tablet mode as needed. Unlike Microsoft’s hardware however, The C930 comes with a stylus at no additional cost much like its X1 cousins. And unlike its X1 cousins, the body of the laptop has built-in housing for the stylus, much like Samsung and their Note line of phones. It just makes it far easier to shove it in a bag without needing to ask “did I get everything?” and easier to grab the stylus when I needed to make a quick note. This was really my only real gripe with the X1 Tablet – the stylus becomes another thing to carry. The stylus is nice and thin too, smaller than not only Microsoft’s Surface Pen but Apple’s Pencil offering as well. Sleek aluminum construction keep this unit light while maintaining the build quality and solid feel Lenovo units are known for. It’s not a pure gaming laptop like those in Lenovo’s Legion line, but it still does have a subtle white backlight under the keyboard, which is convenient for working at night or in the dark. With its smaller size, the keyboard has no dedicated number pad, so that may take a bit of getting used to based on what kind of machines you work with. Otherwise, the 4.95mm bezel all the way around surrounds a screen that combats the brightness issue some of Lenovo’s previous models have had.

It’s still dimmer than some of the competition like Microsoft’s Surface line and HP’s Spectre x360, but still perfectly good, and with excellent multitouch function. One thing to consider mind is that my test unit had an FHD screen. The Yoga C930 is also available in a 4K variety for those of you that need to really push those pixels. The last functional design element also promotes media consumption, and that’s the rotating sound bar between the screen and keyboard. The sound bar, which features a Dolby Atmos speaker system, pumps some serious sound for the size. Regardless of how you’re using the C930 – laptop, tent, stand, or stand – the all-around soundbar provides good sound. Don’t expect super bass hits – I mean it is a 14″ laptop. But the sound bar provides decent full-spectrum sound without any clips or pops, even turned all the way up.

Compared to the Legion series, the Yogas are going to have a greatly reduced number of ports by default to keep the design thin and allow a 360 degree hinge for 2-in-1 operation. In addition to the audio combo jack and USB 3.1 port, the Yoga C930 comes with 2 USB-C Thunderbolt ports, which support PowerDelivery, DisplayPort, and full function USB 3.1. Bluetooth peripherals may be your best bet here if you’re looking for a travel mouse or keyboard, unless you’re running everything off of something like Logitech’s Unifying platform. There’s no room for an RJ45 or a full size HDMI, and as is my gripe as always – no card slot.

One little feature for convenience is something that may be small but is often overlooked – the webcam can be flicked closed from the top of the screen, so you can put away your duct tape and sticky notes. It’s little things like this that show that some thought was put into the design.

Let’s remember first here that we are dealing with an Intel UHD 620 and not a big beefy GTX card like in the gaming laptops we’ve looked at here before. The game testing here is going to naturally be with some settings turned down for the sake of performance. I started on the Blizzard train with World of Warcraft. Trying to play this with any high settings was never going to happen. Much to my surprise however, setting the graphics to a “5” allowed smooth gameplay. The textures lost all smoothness and the field of vision became fuzzy while zoomed out, but the point is that the Intel UHD 620 was able to at least give you smooth gameplay on the go, provided you had a decent internet connection. I followed that up with some Overwatch. Again, playable. I had to drop the resolution to 1366×768 and limit it to 30fps but still actually playable. It gave this unit a lot of credit for folks that travel for business or pleasure, and want to squeeze in a couple rounds between meetings or knock out an LFR between landmark visits. As you can see you’re going to get clunky edges and as fuzzy characters (blow up the images to see what I mean), but you’re going to get the framerate to play on the go. And that’s keeping good battery life as well as 2-in-1 functionality at 3 lbs.

And then you know, some Hearthstone. Because it is so much more fun to play in tablet mode and runs flawlessly as it should.

Rise of the Tomb Raider was up next, but what was I really expecting here? If the in-game bench on Steam gave me an average of 30fps with very turned-down graphics, I’d probably be happy. I tested GTX 1050 Ti’s at max detail at 1920×1080 with FXAA and double buffering. I tried that one first on this unit. You know, for science. Here’s how it did.

… SEVEN. POINT. EIGHT. EIGHT. Watching the bench, it’s clear that somehow the Intel UHD 620 could produce decent image quality, but just couldn’t sustain a framerate at those settings. But that’s ok – this machine simply isn’t built for that. It’s what was expected and like I said before, done for science. I dropped it to something a bit more reasonable next. So it didn’t hit my hope of 30fps. And it was pretty grainy (again, blow up the image to see full size). But I’d still say this was a decent test, considering the GTX 1050 Ti in Lenovo’s Legion Y730 scored an overall 42fps at max detail, 1920×1080, FXAA and double buffering. That’s a gaming-spec laptop that’s tuned for this sort of thing.

As always, I ran this through a normal day of non-gaming use for business and leisure. This particular day was a day trip for business working out of a client’s studio. The morning was spent unplugged, streaming Google docs from the Yoga to the big TV on the wall while collaborating on some business risk evaluations on their WiFi. Going from laptop to tablet mode and pulling the stylus from the built-in housing to mark up existing documents was smooth and simple. After the drive home I continued testing with some HBO Go – I hadn’t caught up on the last couple episodes of Last Week Tonight so I set up our boy John Oliver in tent mode on my desk while I did some work on my desktop. Next on the menu was working on some graphics with Adobe Photoshop, which it was able to accomplish without any hiccups. At this point, after running various things on the Yoga and trying to flex every function it had for a sum total of 8 hours, the battery indicator was still showing me at 10%, which is impressive. It shows that the Yoga C930 can last a full day without a charge. The Lenovo Yoga C930 gives users power and portability in one. Not only is it a sturdy but lightweight traveler, but provides 2-in-1 functionality for effective and grossly accurate writing for tablet-style notetaking or sketching. The 360 hinge allows it to be both lappable and configured in stand and tent modes to allow media consumption in small spaces like a coffee table, night stand, or even the tray table for a seat in coach. It’s a great advertisement for Intel’s integrated graphics, with the UHD 620 in this unit performing much better than I thought it would.

The unit starts with an i5 and 8GB of memory for $1,199.99 right now, and for those who want to max it out with 1TB of SSD space, 16GB of memory and a 4K screen can snag one for $1,759.99. And there’s a lot of range in between. Keep in mind that those specs are a bit higher than my test model, and with the additional power draws the top-end model might not live up to the battery life I got on this unit. But hey, that’s just how electronics work, right? All said and done, This one is tough to send back to Lenovo.

Overall? An excellent balanced unit that will server road warriors as well as PC enthusiasts, the Yoga C930 is a clear winner in the growing field of convertibles for 2018.

December 5, 2018
Our Review Process
Latest Reviews
Where to?