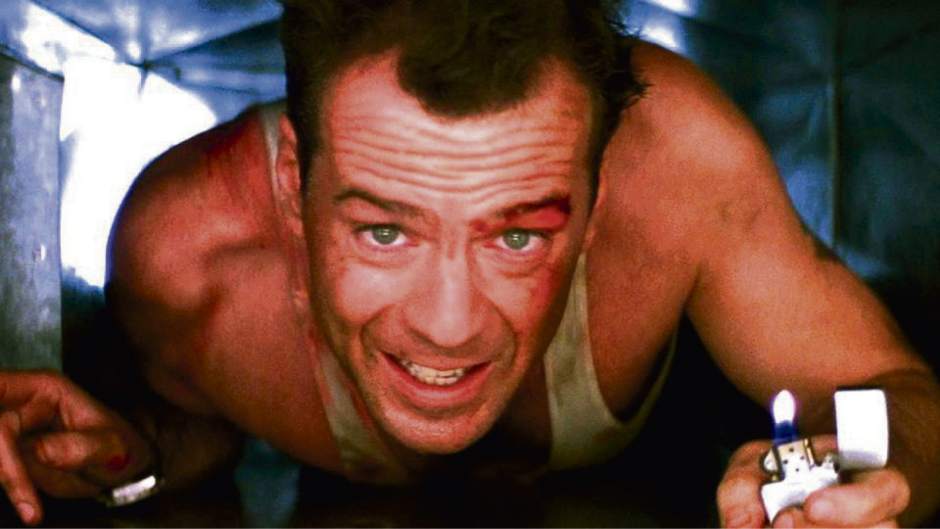 So what we’ve being seeing in this last week’s lead-up to Christmas is a lot of arguments back and forth on Facebook about whether or not Die Hard is a Christmas movie. We’ve seen it several times over the years and we have to say, yep, it sure is. And it’s not the only Christmas movie in a non-traditional sense by far. There are plenty out there that you can celebrate your Christmas cheer with without having to binge 24 hours of A Christmas Story on TBS (Confession: I’ve seen the movie at least 20 times but it has never been from start to finish – always middle to middle).

So why do we love them? Maybe it’s because we like things that are different, and the over the top Christmas happiness and/or lessons and/or happy endings we see in classics like It’s a Wonderful Life and A Christmas Carol provide can feel a bit stale.

The exception of course is the one where Scrooge is played by Sir Patrick Stewart. He can do pretty much whatever the hell project he wants with impunity. God bless him.

So without further ado, in no particular order, here are Technical Fowl’s 10 Not-so-Christmas-Christmas movies for your yuletide movie marathons.

The Nightmare Before Christmas OK. This one is a little tough. Sure, “Christmas” is right in the title, but is this really a Christmas movie or a Halloween move? Jack Skellington the Pumpkin King does go to Christmas Town and decides to give Christmas a try, even though his home is Halloween Town.  But the movie is about Christmas. The imagery does provide dark and twisted versions of Christmas imagery. Jack dresses like Santa Claus. There’s themes about the true meaning of Christmas. And what about that animation style? Doesn’t it remind you of the old Rankin Bass films? To me that’s enough to call it a Christmas movie, but sure it could be a Halloween movie at the same time. Henry Selick, the film’s director, flat out says that it’s a movie celebrating Halloween. That may have been the intent, but this film still screams Christmas with every turn.

Also, for our fellow IT folk and engineers out there, it doesn’t matter. After all, DEC 25 = OCT 31. I am lucky in life to have people during the holidays, though other people are not as lucky. I’m not sure there’s a film that captures the loneliness and isolation some people feel during the holidays while everyone else is happy better than Edward Scissorhands. Edward is basically a version of Frankenstein’s monster created by Vincent Price’s Inventor, living in a large and dark straight-up goth castle overlooking a small town. After being “rescued” and falling in love with the daughter of the family that took him in (Winona Ryder), Edward is constantly walking a line between being loved and being exploited by the new community he’s trying to be part of. As Christmas approaches is when he is regarded with “Merry Christmas, we’re getting our pitchforks.”

People can be so nice.

Edward eventually goes into isolation in his castle, away from the society he tried to be a part of, but finds his own solace there, continuing to create snow for the town below as he did when he carved his angel ice sculpture. This is a quintessential Tim Burton flick, and follows the theme that he carries through most of his films – people are different, and that’s ok.

Go is a film of one of my favorite styles, which shows intertwining character storylines all coming together, all of which are kicked off by a drug-fueled rave at Christmas which goes horribly awry. Two young grocery store employees get wrapped up in a weird drug deal, two gay soap opera actors get held hostage by a cop and his wife for Christmas dinner, two buddies in Vegas get have fun in a car chase and shootout, and other hijinx ensue. It’s twisted tale of cops, drug dealers, car chases, and some kids just looking for a good time. Go is anything but a traditional film for Christmas, but will fit in perfectly in your Christmas day marathon.

As the movie tagline says itself, “life begins at 3 AM.” So maybe I’m a little biased here, but I have to give some love to movies that were set in our city of brotherly love. The film actually takes place from Christmas to New Year, where two über-rich commodities brokers make a wager to see if it’s upbringing or genetics that makes someone a criminal. Their marks? Commodities broker Dan Aykroyd and criminal Eddie Murphy. Trading their places as the title implies, Akroyd’s rich and proper Louis loses his money, his home, his friends, and his life, turning to Jamie Lee Curtis’s Ophelia for help. Eddie Murphy’s Billy Ray gets to go from the criminal life to living in a nice brownstone with all the money in the world, and a new job as a commodities trader. Elements of A Christmas Carol as each of them see how life could have been? Oh yes. Drugs and Santa suits? Indubitably. Eventual double hero team-up to take up the rich big bads? Indeed. An over the top ending where they are on a beach where their butler has a butler? For sure. Christmas and New Year celebrations? Check.

All on the backdrop of Christmas in Philly. Dennis Leary as a criminal on the run invades a home and kidnaps the couple living in it on Christmas Eve, unknowingly picking a family whose internal tension gradually grates on his own nerves, bringing us the response that, well, only Dennis Leary could bring. Transitioning from kidnapper to marriage counselor to unintentional therapist to… family friend, The Ref is dark dark dark comedy at its core. It features dysfunctional families at Christmastime, a couple on the brink of divorce, a kid that runs blackmail scams at his school, an overbearing family, a criminal trying to get away, and all of the bundled craziness that comes with it. Is it Stockholm syndrome? I don’t know, but it works. BATTY THE SECOND, as my friends and I referred to it years ago, is what happens when you give Tim Burton some additional creative freedom. Much like A Nightmare Before Christmas, what we are treated to here is a dark Christmas. It’s not bright, it’s not all pretty lights and happiness, but instead a darker, grittier Christmas as I’m sure we’d only get in Gotham City. Christopher Walken’s Max Shreck is the anti-Santa Claus. He’s got white hair, makes candy cane striped smokestacks, and is out to steal from the kids of Gotham instead of giving them gifts. The fantastic Christmas themed action starts right from the tree lighting ceremony, where a very large gift box explodes to reveal a circus of bad guys wreaking havoc. Outside of the story of Batman, Catwoman, and the Penguin, who on their own are examples of isolation during the holidays – both intentional and not – Burton steeps us all in possibly the most Christmas-y backdrops I’ve seen. The characters are far from brimming with Christmas cheer, but somehow it all still works. The reason for this post from us. So the core of the plot isn’t Christmas, but it still has yule coming out of its ears. On the backdrop of a Christmas Party on Christmas Eve, Bruce Willis gets to play cowboy against Alan Rickman, which on its own should be enough to light up your Christmas Day. It’s got a rescued relationship as a Christmas miracle, and our boy John McClane spends more time in a duct than Santa spends in chimney with the help of, let’s face it, his elf, in Reginald VelJohnson. And he delivers. Also, let’s not forget this Christmas gem –

“Twas the night before Christmas, and all through the house, not a creature was stirring, except the four assholes coming in the rear in standard two-by-two cover formation” The thing most people remember about Gremlins is that Gizmo is adorable, and THE RULES: Don’t get him wet, no bright lights, and don’t feed him after midnight. But why is the Mogwai there to begin with? An inventor is looking for a Christmas gift for his kid, and buys this from a shady antique shop in Chinatown. Christmastime is all around, with decorations in the town as well as Christmas movies on TV. Gizmo even wears a Santa hat! The chain of events, kicked off by an idiot Corey Feldman, spawns more Mogwai and now they’re in a Christmas fight after they evolve into Gremlins. Would this movie be much different if it wasn’t at Christmas? Maybe not, but it’s still capable of giving you a fright on your Christmas day. The Rocky franchise pretty much blends into one long move to me, with the exception of the 5th entry, because I refuse to include the “Tommy Gun” street fight as Rocky canon. That being said, while the first Rocky was a great hero film about a small time Philly boxer that got a shot and made his name through hard work and determination, the following films got a bit nuttier with each iteration. As I said, Rocky V was way too far, but Rocky IV was peak Rocky before it went insane.

As far as I’m concerned, this film ended the Cold War. After the death of his friend Apollo Creed in the ring at the hand of Russian monster Ivan Drago, Rocky flies all the way to Russia to participate in what can only be described as the greatest training montage in cinematic history. The reason? The fight of the century – Balboa vs Drago, on Christmas Day. And after the fight, what happens? America and Russia are friends in the spirit of Christmas and Sport! Happy birthday Jesus! Before his fame with Three Billboards Outside Ebbing, MIssouri, director Martin McDonagh was already making hits a decade earlier. In Bruges is a tale about two hitmen, played by Colin Farrell and Brendan Gleeson, that for a number of reasons are forced to take a Christmas vacation in Belgium during Christmas. The two are a spectacular rendition of The Odd Couple – trying to be tourists in Bruges and take in some of the sights (begrudgingly), all while trying to hide out and not get killed in the process. A dark comedy that’s a mix of a travel log, an odd couple, some serious moments, and a plethora of f bombs, In Bruges is still… strangely uplifting, and somehow works.

So there you have it, our list of 10 not-so-Christmas Christmas movies. We know there’s plenty more out there but you know, 10’s a good round number. We’d love to hear what your favorites are this holiday season. Merry Christmas and Happy watching!

December 25, 2018
Our Review Process
Latest Reviews
Where to?