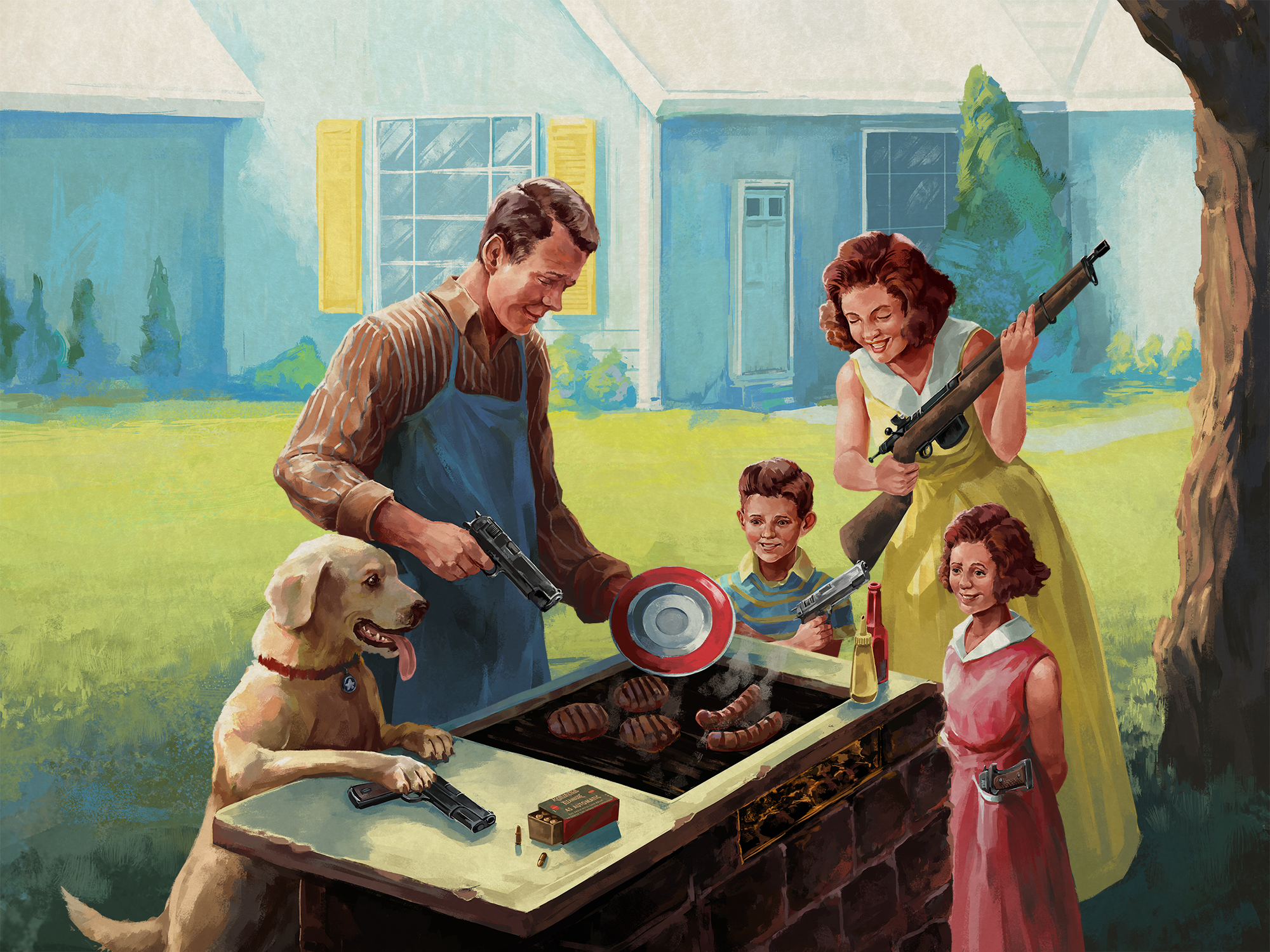 With the advent of the Rift and the Vive and other consoles, virtual reality has become the new playground for games, jumping us from 2D worlds to 3D immersive experiences. The greatest part is the breadth of genres the platform lends itself to. Jumps and scares are amped up in horror games, escape the room games let you solve puzzles in 360 degrees, and you can even take a virtual staycation in a VR environment of a tropical locale. But this was the first time I’ve seen VR used as a satirical vehicle. Samurai Punk’s The American Dream is that satirical virtual reality trip, giving the player a journey through a 1950’s World’s Fair where you learn to live your life with guns. The world of The American Dream sets its sights on a future where guns are used for all manner of things like eating a meal, driving a car or working to provide for your family. This isn’t just a “guns make us safer” sort of thing though – everything, and I do mean evvvverrryyything – involves guns. Bleeding with satire from every virtual pixel, the demo let me experience the complete gun life. As a baby, I shot the door from my nursery to get mom to come feed me. As an adolescent on my first job, I had to eye burger patties on a grill and fire at them to flip them before shooting the “order up” button for my co worker to take them to the customer. It was a strange reality, but one I found incredibly humorous and poignant. The game’s UI is pretty basic – in your hands are firearms, and interacting with anything on the screen involves firing some rounds into it. And with a near unlimited amount of ammunition at my disposal, reloading was bopping buttons on the sides of the cart to eject fresh clips into the air, where you literally enter bullet time, slowing everything around you so you can swing your guns around to catch the clip in the firearm. It lets you somehow simultaneously channel your inner John Wick while at the same time pushing satire. While each action begins to become more ridiculous than the last, the whole thing is narrated by the trusty dog, Buddy Washington.

… Again, the dog made me feel further John Wickish and wonder if this was in fact his childhood.

That’s not all there is to it though. Despite the fun and the guns and the charming World’s Fair style, it’s impossible to ignore what this satire has its sights set on.

The ridiculousness of an on-rails shooter mocking gun culture seems unfortunately relevant as of late. In an era when gun lobby groups in the US almost fetishize firearms with strong and effective propaganda, The American Dream seemingly takes that to its cynical extreme, aiming at guns and violence in games in general. Added relevance comes from the fact that Samurai Punk is in Australia, which as a country has seen a sharply marked drop in gun crime since enacting stricter gun control in 1996, after a tragic mass shooting in Port Arthur killed 35 and wounded 23 others.

I got a chance to talk to Samurai Punk Co-Founder Winston Tang on the topic:

TF: This game is clearly a satire of gun culture. We’re experiencing our public forum on this right now in the United States. What particularly prompted you to use this as the backdrop for the American Dream?

WT: The American Dream was originally conceived as more of a parody of the attitudes towards guns in mainstream media, particular video games. However, as we delved deeper into the topic of gun culture in the media, we soon found that it was impossible to divorce the world’s gun culture from the gun culture of the United States. The US is hugely influential and its attitudes around guns slowly but surely has bled into the rest of the world with its media as the vehicle. We felt it was a good opportunity to not just look at the use of guns in games, but to delve into the origins of why we as a global society has this fascination with guns and a lot of it traces back to the gun culture of the US. Plus, you guys did that Australian episode of The Simpsons, so we’ve been waiting for a chance to return the favour. Before you ask, we unfortunately still haven’t solved our giant boot violence problem.

TF: Satire or not, is this a comedic take of Australia’s vision of the United States from the outside?

WT: Well we obviously can’t speak for all Australians, but the game is most certainly born from outsiders’ perspective on the United States. I won’t say that our views are any more right or wrong, but I will say that we can look at the situation with less emotional baggage. In my opinion, the people of the United States are incredibly team oriented. They support this sports team, that sports team, they’re Republican or Democrats and there’s not much in-between. It’s very adversarial and doesn’t really make for a great environment to look at the big picture when addressing issues, people like to stick to their team’s views and do not stray from them. For us, we aren’t on any team at all so we just try to look at the hard facts, compare opinions as objectively as possible and then make something funny from it all.

TF: Why do you think VR was the appropriate vehicle for this?

WT: Making this game in VR allowed us to experiment with a lot of new types of gameplay that are just not possible with flatscreen games. Our studio thrives on weird, experimental gameplay so we really jumped at the opportunity. Was it a smart move? Hell no, we had no idea what we were doing because we’ve never done VR before and nobody really knows what VR is truly capable of. But on the flipside, having a blank canvas with no restrictions was really exciting to work with.

In terms of how the VR medium itself lends itself to what we’re trying to achieve, we set out to make a game about living your everyday life with guns, and it means doing as many mundane actions as possible using affordances of the medium. The advantage of VR is you really get to put your body into the game like never before, so you can do all these weird little mundane actions that wouldn’t be nearly as interesting if they were assigned to a button press. For instance, physically leaning forward and sticking your mouth out to eat food off a gun is much funnier than “Press X to eat food off gun”.

If you’d like to delve a little deeper into the thematic implications of VR, players might notice that they never have a body in our game; they’re only ever a pair of floating guns. Make of that what you will.

Do take a tour of this high caliber life. For the gun of it. The American Dream is out now, and available for Oculus Rift, PlaystationVR, and HTC Vive

April 18, 2018
Our Review Process
Latest Reviews
Where to?