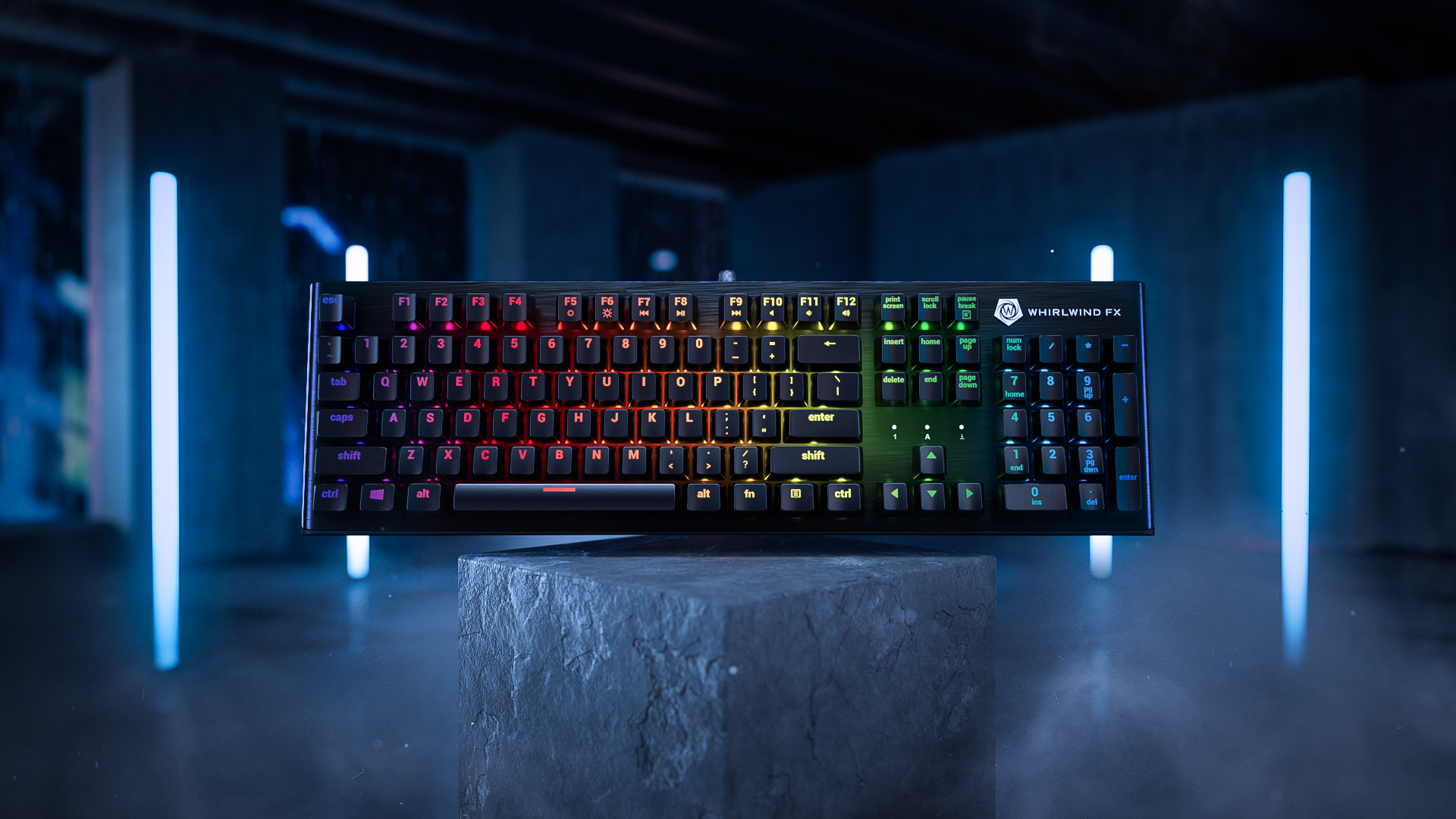 Two switch options for your style

Excellent value at $99 (at time of writing)

Some gamers may miss their macro keys

PC gaming keyboards come with just a handful of questions now – How is it built? What about LED control? What kind of switches does it have?

These three questions pretty much sum up most gaming keyboards. Enter the Element by Whirlwind FX, and we’re looking at something a little bit different just when we thought we saw everything keyboards had to offer. Spoilers: this is a super sturdy board with a built-in light show like we’ve never seen before and is at the time of this writing $99 from Whirlwind FX and Amazon (yes, that’s ninety-nine). First, some specs: I’m an engineer by education and at heart so I was able to fully appreciate how solid this felt when I took it out of the box and immediately noticed that this beast was was made of metal. The no plastic feel and absolutely zero flex on the deck are thanks to WFX using anodized brushed aluminum for the framing, almost challenging gamers to give it their worst. The keycaps are replaceable and my particular test model was equipped with Kailh linear red switches, which play nearly identical to the Cherry MX red’s with a near negligible difference in actuation force, but they do give you the option of Kailh’s clicky blue edition when you order. The mechanical keys feel good typing and have the performance that one would expect from switches like these. I like the reds because the sound and feel is satisfying, and not so clicky I have to have headphones on to ignore it. If clicky is your game though, pick the blues when you order.

Though it doesn’t have programmable macro keys, this is a full keyboard with a numpad. I’m good with the tenkeyless for my travel stuff but this is sitting on my main desk and I like having all the keys one needs.

I feel pretty confident overall though that I’m not going to break this thing.

The Lights – Basic controls and more This is what you came to see. The run of the mill gaming keyboard can provide the performance of mechanical switches as well as some key lighting, but they can’t put on a real live show. Like those keyboards, lighting on the Element can run using custom presets available for download in the Whirlwind Engine software for idle effects – for example my keyboard is doing the green code thing from The Matrix right now (it’s called “Terminal”) but I can set it to have responsive column lighting on key strikes (Lightning), various other dynamic effects, or just have a solid color. Also available are new effects to download developed by Whirlwind FX as well as a growing community using Lightscript – meaning if you have the skills and inclination you too can make your own effects and share them with everyone. All you need is a little HTML5 and some Javascript. Not bad for the basics. But Whirlwind FX adds some things to the mix by being able to not just use isolated lighting information, but lighting effects that are truly user-interactive.

These interactive dynamic lighting effects are based on what’s on your screen. The Whirlwind Engine defines your keyboard (or as we saw at PAX multiple keyboards daisy chained together) as one solid canvas that can show live paint, for lack of a better way to explain it. Your screen resolution is mapped to that canvas, and as pixels light up on the screen, a representation of that appears on they keyboard (or keyboards). So as you’re watching your YouTube clips on a work from home break or in the midst of a Netflix and chill, the lighting on your keyboard will glow with the same colors in the same positions as is on your screen. Basically if there’s media being consumed, it goes to its dynamic state. And if you want, you can have it just do this all the time. You can also turn this feature off completely but really, why would one do that on this particular peripheral? Check out my quick video of my Element and my laptop to see what I mean – even a basic cycle through my World of Warcraft toons is a good example.

The same concept follows into gaming, where your actions in-game dynamically change the keyboard’s LED canvas. While this is cool on its own, Whirlwind FX is programming integrated game effects for certain games. This became an available feature last month starting with PUBG, Fortnite, and Call of Duty: Warzone, but a custom effects profile for Minecraft: Dungeons has just been added to the list as well. Take a look at the video below for their PUBG integration – the keyboard lighting is a massive indicator for important things like damage, healing, stims, and circles closing. Even for games that don’t currently have integrations, since it reflects what’s on the screen it’s still going to give you indications. If you’re taking hits in most games and the screen is flashing red, so will the keyboard. So even for games that aren’t fully integrated yet, the Element provides game immersion at your fingertips. Or you know, bust out your HTML and Javascript and just make some.

Before the Element, PC game immersion in my head as far as what’s on my desk pointed to massive curved screens and 7.1 DTS speaker systems to put yourself in the sights and sounds of whatever you were playing. This keyboard offered a surprising addition to the immersive experience, adding real dynamic tactile feedback to whatever is happening on screen. And it’s… well… it’s really damn cool. If more users get involved with lightscripts this has the potential to have a community making a bunch of cool effects to share with all. It’s also a great build with quality materials and seriously right now a $99 price point is pretty tough to pass up for what you’re getting. And if you’re convinced, you can pick one up at Whirlwind FX or Amazon. And while this isn’t a wrist wrest review, the one I got with my Element is seriously plush, and currently only a $25 addon. Seriously my only little nitpick is that it takes a bit of extra customization and work to get the software running properly on ultrawide monitors. But let’s be real, that’s something they can have fixed with a software patch and I had mine running fine on a Lenovo Legion Y44w (which you can peep my review on here).

Final verdict? The $99 ticket price to this particular light show is worth every penny.