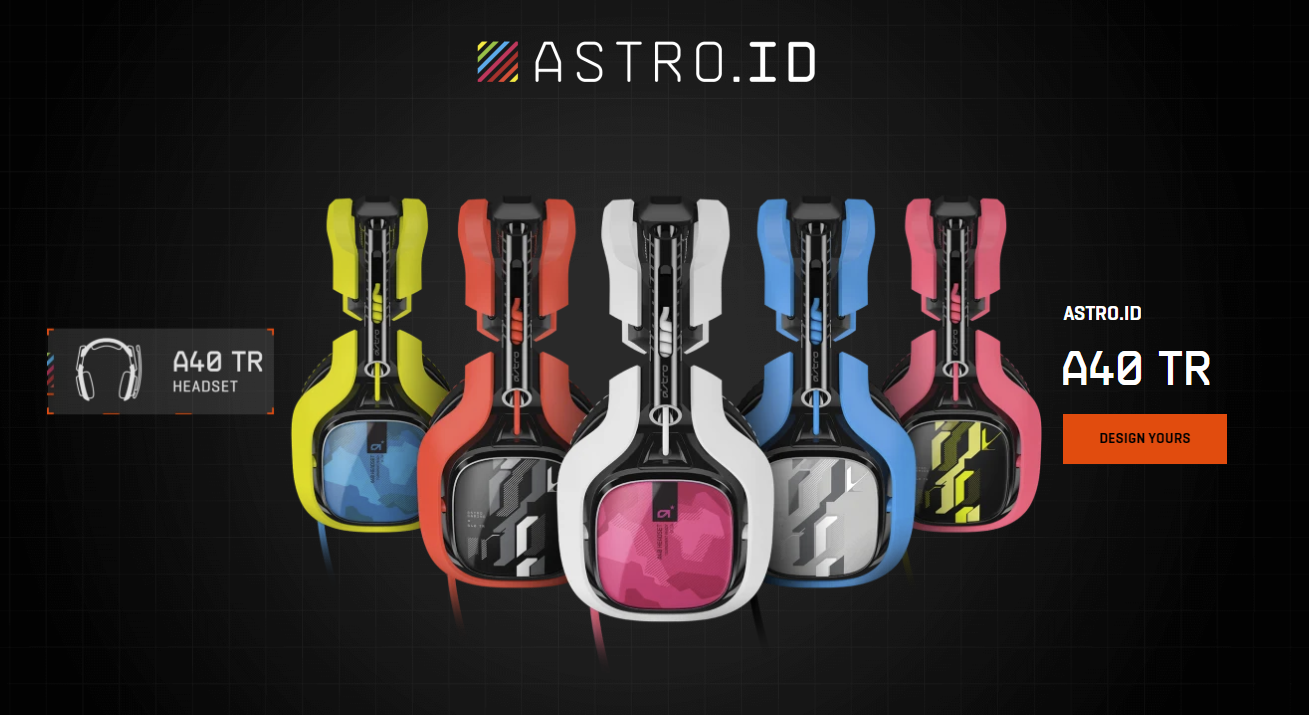 No sound customization on its own without the MIXAMP

Though nearly full custom, $200 is a bit high for wired

If there’s one thing we can generally rely on as technology consumers, it’s that the current edition of the hardware that we have will soon be obsoleted and we’ll be reaching for our wallets to shell out for something new. Astro decided to do things a bit differently, and are coming at the headset game with the attitude of “if it ain’t broke, don’t fix it.” Their A40 TR headset has been a mainstay for gamers and streamers since its initial release years ago – and barring some minor changes to the design, it’s still rolling strong in 2020. So as I do, here’s some specs of the model we got to take a look at: We spoke with Astro’s Thadeous Cooper on the topic of customization and the story behind ASTRO.ID and the A40 TR in general. “We really had to design it with e-sports players in mind – they have a very specific set of needs. They travel with all their gear so it had to be portable. They practice everyday for 6-8 hours so it had to be lightweight and comfortable, and it had to sound good. The tuning for the drivers had to be very specific for e-sports – there’s a lot of credence to the highs and mids, giving ample bass without adding bass distortion.” Astro traveled around with professional gamers for over two years to learn what was important to the folks they were building this out for.

So it began with the magnetic speaker tags that allowed folks to put their own art on them. “You can have your gear be part of your uniform, instead of just being a headset,” Cooper told us, while also keeping sponsorships in mind. “Suppose you have Red Bull as a sponsor, then you can have Red Bull tags. So if you get a new sponsor, you don’t have to buy a whole new headset – you just get new speaker tags.” The main goal behind ASTRO.ID is to make the headset yours and almost an extension of yourself. “So instead of wearing our headset with a big ASTRO logo on it, you’re wearing your headset.

The customization doesn’t stop at just the look and driver tuning – users can switch from open back to closed back when they need to adapt to different environments, since sitting at your computer at home is going be a bit different than playing in a loud tournament. The mod kits come with vegan leather ear cushions, a voice-isolating mic, and speaker tags equipped with silicone gaskets to seal up that sound. This is another design spec targeting e-sports players, when sometimes winning or losing is based on the smallest sound of something you can’t see, but allows again for the user to not have to buy multiple headsets for multiple environments. ASTRO.ID is the next step of customization that focuses on aesthetics instead of performance. “The idea for ASTRO.ID is that there’s 6 different components in the headset, and there’s 6 different colors with two prints on the speaker tags. So the idea is 6 to the power of 7 for choices.” That’s not counting the fact that ASTRO lets you upload your own art to make custom speaker tags.

Like e-sports players, streamers also love having their own brand for their shows and casts, and with the ASTRO.ID program, anyone can customize their set for their own needs.

The set we have in house to review was designed by the lovely and talented Jenesee Grey from Good Shepherd Entertainment and The Grey Area Podcast. What did she pick out? A white frame with pink cushions and headband, a black cable, white mic, and pink geo speaker tags. We pored over this for a while, but it’s quite a nice set. The fact that it also comes with a hardshell case makes it great for travel too.

There’s a reason the A40 TR has been on the market for years. Astro has provided great sound for a decade and none of this comes as any surprise.

These sounded as good as Thadeous advertised with precisely the sound profile he described to me. There is good bass with minimal to no bass distortion, and the sound profile really hits those mids and highs with gusto. I got complete sound in FPS games like Overwatch and Modern Warfare, where it’s kind of important to be able to hear footsteps and weapons fire with a level of spatial accuracy.

So no surprise, it’s great for gaming. But popping out the removable mic I also tried it out as lifestyle headset, and streaming shows and movies on Netflix was a great experience. I always test headsets with John Wick because the sound is so varied and dynamic throughout the film, and the A40 TR was not only comfortable for a couple hours at a clip on my head, but let me hear all the pings of small arms fire in the Red Circle scene without distorting the mids and lows from the music track. The one thing I did notice is that in scenes where there’s both heavy bass rumbles as well as high-register pings, the A40 TR will favor the highs, almost pausing the bass to make them more pronounced. So this time instead of just keeping the review to games and media, we’re going to be adding streaming to the mix. I’m no streamer by any stretch of the imagination but guess what? Jenesee’s pretty good at it, so she took it for a spin to stream some Monster Train. What I am though is a great spectator. When she dons this set for her streams, the mic is picking up crystal clear sound, and whether I’m watching on Twitch or Steam on either my PC, PS4, or Samsung Galaxy Note 9, there’s no clips, no pops, and it doesn’t sound like the voice is coming from underwater or from a long-distance call. 100% clarity coming through whether she’s reserved during rounds or cursing a boss fight.

The A40 TR’s come default with a standard 3.5mm connection and a PC splitter cable, but pairing it with their MIXAMP DAC amp will let you run it as USB, and add a lot of power and control for streamers and content creators in conjunction with their ASTRO Command Center software. Unfortunately, one of the very few cons to this unit is that Command Center only works if the headset is paired with the MIXAMP. On its own there’s no equalizer or sound customization controls.

You could always upgrade to their A50 and base station to take advantage of Command Center, but then you’d lose all of the cool ASTRO.ID customization. Maybe we’ll see an ID version of their A50 soon?

You all know my thing is multiclassing. ASTRO’s custom philosophy with the ASTRO.ID A40 TR lets me have a single headset with swappable parts to match my environment. Granted, I’m not a pro gamer and I’m 100% good with the open back experience in front of my home PC, but that sound does leak, and others in the same room can definitely hear what’s happening pretty well. A mod kit would definitely help with that when I’m being a bother to others. Otherwise good for gaming, good for media, and good for streaming too.

September 18, 2020
Our Review Process
Latest Reviews
Where to?