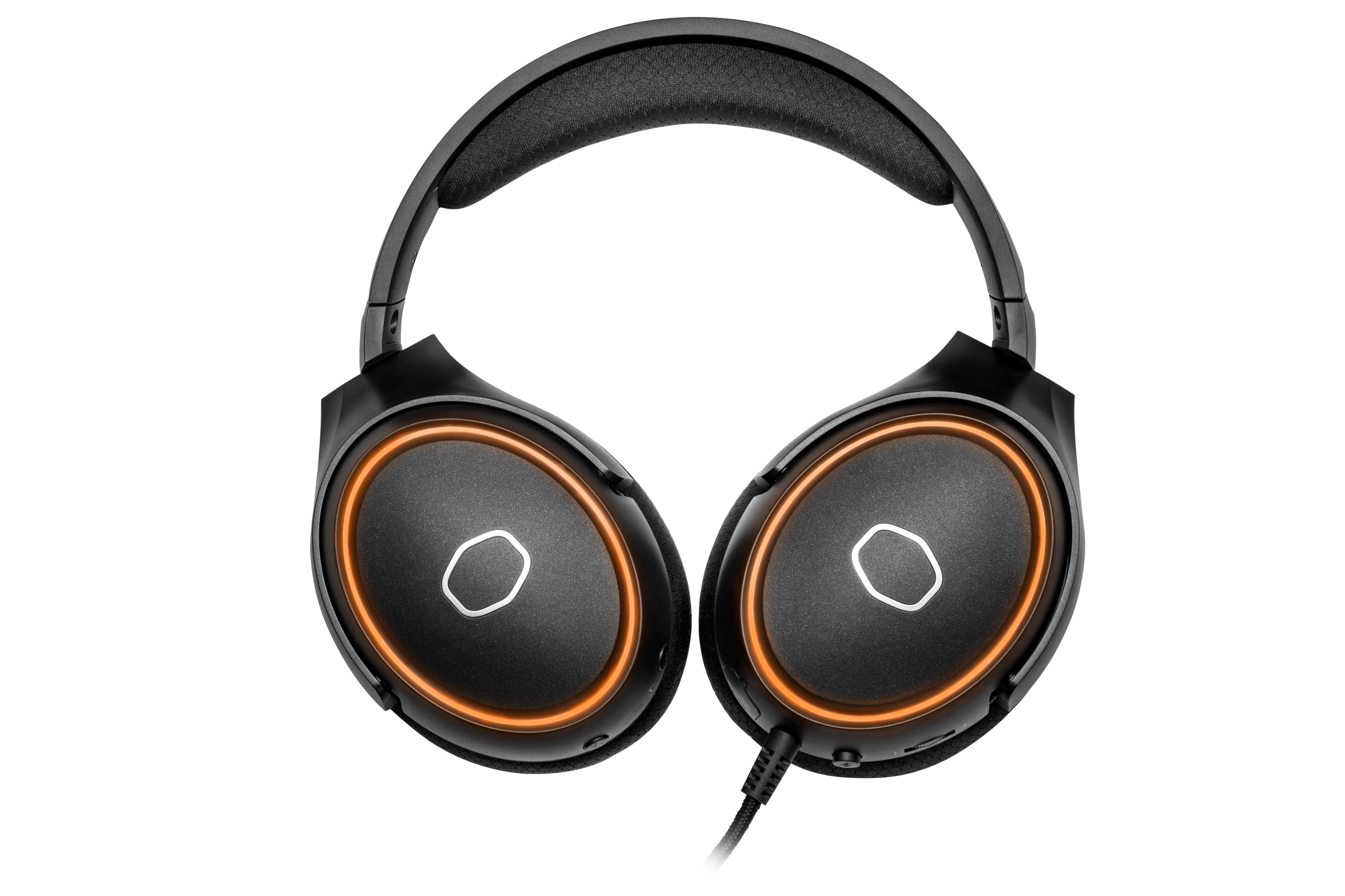 LED's are a new level of customization

Easy to use on PC, not too much scope for as-intended use on my PS4. This will be the first of a couple of reviews from Cooler Master’s new MH600 trio of 2020 midrange headsets (models 630, 650, and 670). Each of the three models have their advantages – the MH630 is great on budget and made for multi-platform compatibility, the MH650 features RGB LED lighting, and the MH670 goes wireless with 2.4GHz connectivity. While The MH630 is an ideal entry-level headset without breaking the bank, this ain’t my first rodeo. So I took the latter two for a spin, and today we’ll be getting bright and shiny with the RGB-lit MH650. Before we begin, some key specs:

The MH650 comes with all of the Cooler Master standards in terms of function. With swiveling cups that fold flat, a braided cable that resists tangles and knots, and detachable microphone, this headset is built to travel, and won’t take up a lot of space in your bag (and can do so stylishly in the included travel pouch). And they’re comfortable too. CM uses foam as the main cushioning for the ear cups, and they use a LOT of it – which is good, because it’s definitely enough to fit tightly on my ears and head without pinching. It’s the same with the foam on the headband as well – both kept me comfortable for long periods of time trying to get a new toon to 70 on the new Diabo III season. The headband is adjustable and from the extent of what I can see, they should fit domes of most sizes. And I appreciate it though others may not – but each cup is emblazoned inside with a giant “L” or “R” to indicate direction. The detachable microphone makes it good not only for travel space but for style of use – popping out the mic converts this to a set of lifestyle headphones for media consumption. One of the nice little details I noticed is that the foam is covered in a mesh fabric, and upon closer inspection that fabric pattern is hexagonal. Not only does this detail look nice, but is a slick nod to their own hexagon logo branding.

This headset connects via USB, and some folks might not prefer that over 3.5mm audio for use in consoles or mobile devices. The MH650 does come with a USB to USB-C adapter though, so this solves that problem for most if not all recent-generation and current-generation smartphones and mobile devices. I was able to use the adapter and plug into my Samsung Galaxy Note 9 without any issues at all and no loss in sound quality.

One of the big improvements over previous models is the that the controls are on the actual headset itself, and are easily accessible without having to fumble around for in-line controls or shortcut keys on the keyboard. On the left side there’s a volume dial and the microphone mute button. On the right we have toggle buttons for the virtual 7.1 surround and LED control. They’re very easy to quickly make a change and not lose time in your game. Aesthetically the overall design is sleek and simple in black with some metallic flourishes on the ears, which makes these able to pull double duty for both work and play, as is the great theme for all of the 600 series headsets. BUT. This is where the MH650 literally shines – the rings around the Cooler Master logo on the ears are illuminated with RGB LED lights. If you want to keep it low-key, there’s a button on the headset that cycles through the patterns you’ve chosen with one of the cycles being off completely. You can control the patterns and colors using Cooler Master’s MasterPlus software with three preset patterns – color cycle, breathing, and static. I’m guessing this is targeting streamers and podcasters that are on camera frequently and want a good headset with some additional flair.

One other fun part with the LED function – when you mute the microphone, the LED rings flash red. This is a nice little features for streamers to easily and quickly know if their mic is accidentally off when they don’t want it to be.

Cooler Master has come a long way since the MH752 graced the halls of Technical Fowl back in late 2018. The MH650’s just feel more substantial, even though the two are roughly the same weight. The 50mm drivers and higher impedance definitely give this unit a fuller and more complete sound than CM’s previous iterations. The MasterPlus software gives a lot of mixer control for your audio, with a couple of presets and 5 sliders to customize your sound. Two of the sliders are dedicated to direct treble and bass control to tweak that customization a bit further.

It’s a gaming headset so we started with Overwatch to see how the surround was. I had no issue hearing the footsteps and battle all around me, and the virtual 7.1 system gave me a good idea of where things were going on. The booming sounds of explosions and weapons fire were good, and the bass was punchy but not too punchy to be distracting. It was a good balance for highs, mids, and lows, and I messed with the dedicated bass and treble dials in the MasterPlus software to fine tune it a bit. Giving the bass and the treble a bit of the boost with the “gaming” equalizer preset, the low booms came through without clipping or distortion. My Diablo III barbarian sounded pretty full, with good bass hits while casting impact spells like ground stomp and seismic slam. His shouts were also forceful and full.

Next was my staple test scene – the Red Circle shootout scene from John Wick. The “movie” preset while boosting the bass and treble EQ’s really pumped up the music in the background. Every scene in the film is heightened by the score, and this delivered on that. The club music as well as the “stealth” music provided great punchy bass and was great throughout the middle. It did seem in a couple instances that the high chirps of the gunfire was getting a little bit lost in the bass hits, but the ambiance was terrific. On music we started with Massive Attack’s Mezzanine for the “Teardrop” track. Overall very good sound with the MH650 picking up both the bass hits and sub bass melody, and the middles with the piano track had great tone. I found the same kind of reduced output in the high end – like the chirpy gunshots in John Wick, the higher-pitched female vocals not hitting with the same high-end output. For what I call traveling sound, next up was Jimi Hendrix’s rendition of “All Along the Watchtower.” Jimi’s crazy signature guitar solo from this track picked up great, and also the movement of the sound – left to right, back to forth and back again for some of his riffs was represented very well with the 7.1 surround.

As far as the microphone? Several Zoom meetings later, and there were no issues with sound quality or grain. It’s backed up by some recordings I made, and the recording was clean all the way through.

Cooler Master aggressively priced the MH650 at $89.99. For everything I’ve gotten through testing, that is a fantastic price for the sound quality you get with this headset. With a broad range of pickup and 50mm drivers, this is a huge improvement over previous gaming headsets CM’s put out there. My only gripe on the sound is that when there’s a lot of full spectrum noise, high pitched chirps sometimes don’t hit with super sharp impact. But for 90 bucks I can’t even really complain. The fact that it comes with mixer software to fine tune that with adjustable levels make that pretty much a non-issue.

The design is super comfortable and I was able to wear them for a couple hours at a clip without experiencing ear pinch or a sore head thanks to the thick cushioning. On-headset controls are a major up from the MH752 with ease and speed of access. The programmable RGB LED’s are pretty cool, but I’m a master of the written word and not so much the stream, so I don’t ever see them unless they’re off of my head and sitting on the desk. That said, for streamers and podcasters, your streams could probably benefit from a pop of LED color. Also, it’ll let you know when you’re muted by visibly flashing red.

TF’s last word? Cooler Master’s MH650 is a great midrange headset that is designed for work and play, and can add some fun and color to broadcasts for streamers and podcasters without raiding your wallet. You can order a set at the Cooler Master Store or on Amazon for $89.99

Don’t forget to keep it here folks – after the weekend we’ll tell you all about the MH650’s non-LED wireless sibling, the MH670.

April 10, 2020
Our Review Process
Latest Reviews
Where to?