I started playing around with Windows 8 when I got my hands on the Developer Preview a while back.  At the time poking around in there showed me a lot of things that looked very promising.  I saw an OS that was setting itself up to be a decent touch-based platform for mobile devices that retained some (some) of the old school “Start Button” love from previous Windows iterations.  Today I started working on Windows 8 Pro (the actual retail version).  It’ll be available to the general public in October, but my tech pro ilk and I are kind of special, and those of us that are TechNet / MSDN users are pulling it down to play with it now.  So I got a chance to see what’s up.  Keep in mind that I installed this on a laptop though, so I don’t have the ability to review any of the touch features here.

What I noticed wasn’t really wholly different from the Consumer Preview that was released a couple of months ago.  It still has the same look and feel, but the user is offered a few additional options for personalizing their start screen and user profile designs.  It’s quite a bit more colorful and bright than users of XP of Windows 7 are probably used to.  And sure, it does look nice.  So for those of you that put a premium value on colors and look and feel, there you go. But if you haven’t seen anything on Windows 8 yet then you’re probably more interested in function.  In the words of King Arthur in Monty Python and the Holy Grail when asking about the holy hand grenade –

“So, uh… how does it work?”
After logging in with your Microsoft ID (or an unlinked local account if you choose), Windows 8 operates in 2 modes – the first is what you start off in, which I’ll be calling “8 Mode” for lack of a better term. Call it whatever you want, really, as long as you don’t call it “Metro.”  They kind of frown upon that one now.  8 Mode made my laptop feel like a huge phone, with apps and live tiles for basic settings and social media.  8 mode is also what triggers when the user clicks the Start button.  Then there’s Desktop mode, or what I call 7.5 – it’s reminiscent of Windows 7, only minus the traditional start button and minus aero glass.  It’s where users can still get to regular things like “My Computer” and document/picture libraries.
“8 Mode”
As you can see from the screenshot at the top of the page, 8 Mode looks like a big cell phone interface.  Imagine swiping left and right on that screen to get to a number of tiled apps, just like you do on your Android or iDevice.  It runs on live tiles and apps as opposed to full applications that users are accustomed to.  Instead of opening and closing programs like we did in XP and 7, the apps stay on and running all of the time (again, like mobile), letting the user switch between them with Alt-Tab or other mouse driven means.  While the apps aren’t active, Windows drops their resources down to run in the background so it doesn’t hog up system memory.  The design from the Developer Preview and the Consumer Preview has been altered slightly, and the newer scheme really reminds me of the tile system for what currently runs on Windows Phone 7 devices.  The advantage of this interface is really geared for mobile devices – something akin to what we can expect from the ARM Windows RT powered Surface tablets to be released later this year.  There’s also an option to show more tiles, covering quick access to common functions like the control panel and other system settings.

I can at least say that there more apps on the Microsoft Store than I remember there being while playing with the Consumer Preview.  8 Mode comes stock with a “Games” app, linking up with a user’s Microsoft / Xbox Live ID, as well as built-in “all in one place” social apps.  Another default app is for mail, which handles both Microsoft and third party email accounts.  A number of other apps exist for sports, news and travel, which basically act as RSS feeds that look a lot brighter and more colorful than what you’re used to on your basic feed reader.  See? A big phone.  But there’s one thing that gives me pause so far, and that’s the Microsoft Store. Like its competitors, Microsoft lets users broaden their experience by downloading apps for multiple things, but the problem is that it still needs some development.

If you look Microsoft’s future competition in Android and iOS devices, there’s a large gap that has yet to be covered.  Those mobile platforms rely very heavily on the Android Market and App Store to provide a vastly expandable and richer mobile experience to users.  This “8 Mode” interface, which in my opinion would in fact work great with a touchscreen and is posed to compete in its own right, is only going to be able to deliver an experience to rival the other heavy hitters in the mobile space if they can expand what’s available in the Microsoft Store.  Microsoft’s also trying to cash in on the cloud trend with their new SkyDrive initiative for those who love to share and/or overshare on the run, but the whole package is going to need a little more substance. 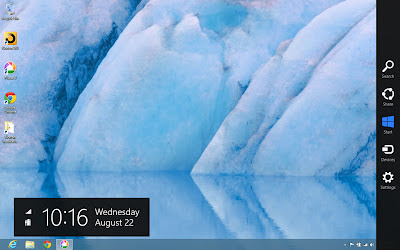 From 8 Mode users can click the desktop tile (or Alt-Tab) over to Desktop mode.  Navigation here runs a little bit differently than it did in Windows 7.  Instead of a single start button that’s the kickoff point for the programs a user would want to open, it runs on a basic premise of corners.  Moving your cursor to the upper right corner opens up a sidebar and the Windows 8 version of the Start menu, which puts you into Metro mode.  A cursor to the upper left acts as a quick alternative to Alt-Tab to switch between apps that are currently running.  Moving the cursor to the lower left does open a “Start” icon, but it only takes the user back to 8 Mode.  What I did notice about this iteration of the desktop is that things loaded and reacted a little bit quicker then they did on Windows 7 using the same hardware.  Maybe it’s because aero’s not taking up as much from the resource pool?  That’s my theory, but either way in addition to that my battery seemed to drain just a little bit slower.  At least that’s what it seemed like.

Basic compatibility so far
I’ve tested general usability using a limited test run of programs that I routinely run in Windows XP and 7 and haven’t experienced any problems. All of my hardware picked up with no incident, but that doesn’t mean that it’s going to be the same for everyone. Of course there were no problems with Microsoft software like Office programs and basic stuff like antivirus.  Next I tried something a little more important, namely World of Warcraft.  It ran pretty smoothly without any performance drop from Windows 7.  It doesn’t look like basic users are going to have any issues.  Power users will be glad to know that virtual desktop does exist like it did in Windows 7 should any compatibility issues come up.

Unfortunately I don’t have a stack of laptops and machines laying around to run exhaustive compatibility tests, but I will have more in depth stuff after I do some extended testing for you next week.

While I had no issues testing the system on this limited run, my experience was on a laptop.  So while sitting here with a fully functional keyboard and a 1080p screen, I never felt any need for the “8 Mode” layer on this OS in a laptop or desktop scenario.  I don’t need “apps” – I have the full internet for pretty much anything I need.  Where this operating system is really going to make sense is on mobile.  The 8 Mode UI would be great for touchscreens with the option to switch over to desktop mode should the need arise.  But personally, I’ll be sticking with Windows 7 so far for my desktop and laptop work and play.

I also see potential usability problems with the 8 Mode interface for users that aren’t up on their keyboard shortcuts.  There were a number of times where I was forced to back out of an app using the Alt-F4 “kill” keyboard shortcut because I simply didn’t see a clean exit outside of using the windows key on my keyboard to switch out to the desktop.  If you’re running a shop where users had a hard time adjusting from Windows XP to 7, then I fear for you if you choose to deploy this.

This by no means says that this is a bad operating system, just one that would provide a better experience on a phone or tablet. And like I said, that mobile experience is going to rely on the fate of the Microsoft Store.  We’ll see how things go with the scaled-down Windows RT on the Surface tablets in a couple of months, and I’ll have more for you soon.

Coming up in Part II: the Enterprise edition’s Windows to Go, Windows 8 file history mode, media codecs, and whatever else I can find

August 24, 2012
Our Review Process
Latest Reviews
Where to?